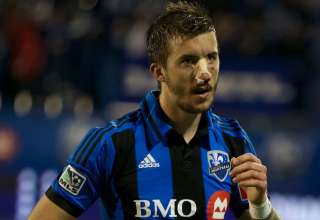 The first leg of the Amway Canadian Championship final finished in a scoreless draw as the Vancouver Whitecaps played the Montreal Impact in front of an announced crowd of just over 12,000 fans at Saputo Stadium.

“It was a tight game tonight. Montreal has started the season very well with some excellent results. Tonight I think we did a good job of shutting them down, had a couple half chances ourselves,” said Vancouver head coach Martin Rennie.

“It would have been nice to have stolen one but overall we’ve given ourselves a good chance going into the second game. The game’s still alive. We get 10 days off before the next leg. It’ll be nice to be playing at home at BC Place but tonight I feel as if it was close game.”

The visiting side fielded a defensive lineup and left with the result for which it had hoped, to keep the home side off the scoreboard and return to their home pitch to try to prevail in Vancouver on the 29th of this month.

“I feel like on the road we’ve been a little bit too open. At times we’ve played quite well but our results haven’t been as good as I would have liked on the road so I felt we should become more difficult to play against,” Rennie opined. “I think the players did their jobs tonight. They made the game more compact and we weren’t as open and easy to play against.”

While his praise was directed towards his side as a whole, some of Rennie’s men came in for particular mentions in his post-game comments.

“Nigel (Reo-Coker) did really well at right back. Brad Rusin was a very big presence for us in the middle of the park, very good in the air, on set pieces and on crosses and Alain (Rochat) kept good position on the right hand side and had a good shot saved by Evan (Bush) in the first half.”

The opening 45 minutes opened with both teams tentative and neither managing to mount a serious challenge on the other’s goal although it was not for want of trying on Montreal’s part.

Six minutes in. Andrew Wenger managed to get the ball to Justin Mapp but it was deflected out of play by Whitecaps goalkeeper Brad Knighton, who also dived on Marco Di Vaio’s 19th-minute effort.

Vancouver’s best opportunity came in the 32nd minute. Set up by a corner kick that pinballed around the penalty area with both Rusin and Rochat unable to pull the trigger, the ball was cleared off the line by midfielder Mapp.

Referee Silviu Petrescu, last season’s MLS Referee of the Year, booked three Montreal players in the opening half, warning Hassoun Camara in the 25th minute, Collen Warner in the 31st and Di Vaio in the 33rd, actions that caused head coach Marco Schallibaum to live up to his nickname, “The Swiss Volcano,” as he seethed on the sidelines and let the officials know his feelings about their work.

“There were three, four, five, or six decisions that should have gone our way,” he declared after the match.

The second half saw Petrescu award a yellow card to Vancouver defender Andy O’Brien for his tackle of Patrice Bernier, who wore the captain’s armband again this evening while Davy Arnaud looked on from a team loge.

Pressing the attack in the second half, Montreal dominated possession time and multiplied its chances with Knighton being far more occupied than Bush, but not seriously challenged by any of the Impact forays.

Jeb Brovsky had a 59th minute shot caught by Knighton. In the 74th he centred the ball, finding Di Vaio but the Italian’s shot, Montreal’s best chance of the evening, was blocked by the Whitecaps keeper.

Schallibaum made changes to add speed and offence with Felipe coming in for Warner in the 62nd minute, Blake Smith coming on for Andres Romero in the 72nd and Sinisa Ubiparipovic, sidelined by injury since virtually the beginning of the season, getting his first minutes of 2013 when he replaced Andrew Wenger two minutes before the end of regulation time.

Brovsky left the game, his face smeared with blood, after colliding with Jordan Harvey as both men went up to try to corral a Matteo Ferrari aerial pass into the box. He left the game briefly to have the training staff staunch the flow of blood and don a clean jersey, returning to the pitch towards the end of added time.

“He’s my hero” said Camara, when asked about Brovsky’s brave return to play. “The way he plays at a high level on a regular basis. I’m very proud to play with a player with his attitude. I hope his injuries are not serious. I know he went directly to the hospital with medical staff and I hope he’ll be back playing soon.”

Bernier, the other player made available after the match, added to Camara’s comment, saying that he was sure that Brovsky would be back very soon, most likely wearing a mask.

“That’s Jeb; he’s a warrior,” said Schallibaum when asked if he was surprised by his defender’s return to the pitch. “Brovsky went to the hospital with medical staff right after the game,” he continued. “It’s bad. His nose is broken and maybe his cheekbone is too.”

The Impact gaffer went on to share the news that another of his players had been in the hospital, Brazilian midfielder, Felipe.

“We started well. We were very direct in the first few minutes. Then they put up a wall and we had to be patient for the rest of the half. We were a little more involved in the second half,” said Schallibaum after the game

“They came out trying for a positive result, not to allow any goals and they did it. We’re happy we didn’t allow any either but we would have liked to score. In the end I think it was a match that was fairly drab in many ways. There weren’t a lot of good chances to score. We played an OK game but it makes the next one very important. I presume they’ll play some more offensive players than tonight so it might be a more open game.”

The Amway Canadian Championship concludes in Vancouver on May 29. For the first time in four years, the winner of the Voyageurs Cup will not be Toronto FC.