December 06, 2022
9 New Articles
Home NASL & USL More NASL & USL If men’s and women’s soccer were truly equal, then Labbe wouldn’t have had to try and bridge the gender gap 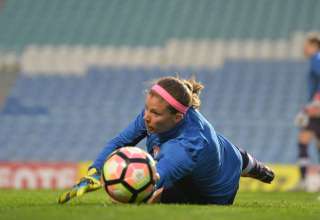 Next week, I re-enter the world of soccer parenting. My daughter, all of five years old, has been anxiously awaiting her first-ever U7 mixed game.

(I wrote “re-enter” because, for a winter, my son tried soccer camp. I volunteered to coach. He absolutely hated it. And, wow, he hates the sport with a passion, now. I’ve kinda accepted that the kid I dressed in an Arsenal kit the day he was born talks about soccer in the same way many Canadian soccer fans have seen in the comment sections.)

Earlier this week, with the snow all gone and the brownish-green fields in somewhat playable condition, Nico and I headed out to, well, just kick the ball around. She dashed and dipped and demanded “come on dad, take the ball off me!” And, me, the old man with the bad ankles, was helpless. She laughed. She howled. It was soccer at its simplest. Just a kid, with a ball, and joy. Pure joy.

Last year, FC Edmonton sponsored a series of events which saw members of the Canadian women’s national team meet with players from the Alberta capital. Diana Matheson first, then Desiree Scott and Melissa Tancredi. Of course, I came out to cover the events, but I brought Nico with me. She was quiet, she took it all in, then she got autographs and got to touch the Olympic medals.

Then, afterwards, she started talking about how awesome “Diana,” “Destroyer” and “Tanc” were. She talked about how “girls could do anything” and “I am going to be in the Olympics, too.” Then, she told me just HAD to play soccer. On a real team. She was ready.

What does this all have to do with the PDL’s decision to not allow Calgary Foothills to register Stephanie Labbe, who had been on trial with the team, as a player? It’s about the message that it sends to girls across North America.

The PDL has stated it’s a gender-specific league and that Labbe, because there are other women’s leagues in North America, has options. Labbe played for Foothills as recently as last Sunday; she came on as a second-half sub for Foothills in the first Al Classico, a friendly between Calgary and FC Edmonton’s Academy, and made a couple of quality stops to preserve a clean sheet she shared with Marco Carducci. Wheeldon said Wednesday that he planned for Labbe to be one of the team’s three keepers for the season, alongside Carducci and new signing Nathan Ingham, who played with FCE last season.

After the game, Foothills coach Tommy Wheeldon Jr. referred to Labbe as “world-class” regardless of gender. He talked about her experience as a Canadian national-team player, and what that brought to his team as a whole.

Labbe has been on trial with Foothills for weeks, but it wasn’t till this week that her eligibility came into question? When I spoke to Wheeldon when Labbe came in on trial, the only issues of eligibility that came up was her age — but Foothills was well within its limits on overage players for an U23 squad.

I had the privilege of covering Labbe’s exploits when, as a teenager, she played for the Edmonton Aviators, who lasted but one season in the W-League back in 2004. To be able to come back to her home province to play PDL soccer would have seen her come full circle. It was a great story.

And, whether you believe she would have succeeded or not, there’s no doubt her presence would have raised the profile of the league.

Sure, argue all you want about women having their own leagues. Make that argument “what if a man tried out for an NWSL team?” My answer is simple. Those arguments would be fair if women pro players had anywhere close to the same money and prestige as the men. They don’t. Not close. So, even though there are women’s leagues, there isn’t equality of opportunity. That’s why there’s still a gender gap.  Trust me. I see the stats on the website. Readership for women’s soccer stories spikes during World Cups and Olympics, then falls right back. Most of us are, at best, occasional followers of the women’s game.

That’s the soccer world my daughter is entering. Next week, she’s going to be playing on a mixed team. She’ll be playing with boys. And one day, I will explain to her why the boys can dream of multimillion-Euro contracts, while maybe, the best a girl can hope for is that soccer will help her pay for her university education.

Wheeldon said that the USL could possibly review its PDL policies at its next AGM; but that doesn’t happen till December. “But, if the issue got on the docket, Steph would have played a role in that.”

Wheeldon said that Labbe will continue to train with the team. The plan is for the club to support her until she finds the next opportunity.

“What we are going to do is to be creative.”

And Wheeldon said that there was no gimmick in mind when Labbe was brought on board. He said that she’s impressed her teammates and the coaches with her fiery disposition. He said that, in making big saves against FCE last week, he and assistant coach Martin Nash saw how focused she was on the task, how dialled-in she was into the game.

Don’t think Labbe deserves a shot in men’s soccer because well, there’s “other leagues?” Well, then make sure for every men’s game you watch, you take in a women’s match. If you claim that the existence of women’s and men’s leagues is all we need to have in order to have equality, well then you need to back that up by following those leagues equally. You need to spend your dollars on the women’s game like you do on the men’s.

Oh wait. You don’t do that? Funny, neither do most people. And that’s why Labbe’s push to play men’s soccer was so important. That’s why it was so important to the girls who dream of playing in the future.