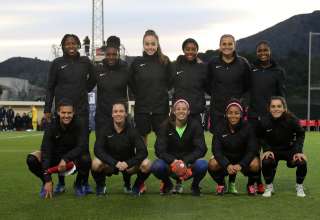 Let’s face it, you would stay off the message boards and Reddit and the soccer blogs if you wanted sober, measured analysis. What you want is reactionary, knee-jerk, panicked commentary.

So, in the wake of Canada’s 0-0 draw with Iceland to open the Algarve Cup, I could take the road less-travelled, which is to simply state that the Canadians had a lot of possession, created a lot of chances, and with regular games will get the rhythm and timing needed to turn opportunities into goals.

But, if I want retweets and reaction (and eyeballs), I’ll need to point out that, in the 2015 Women’s World Cup, Canada’s major issue was lack of scoring depth. I would point out that, despite the presence of FIFA No.2 all-time international scorer Christine Sinclair, that the book on Canada is that this is a team that still needs to take on big international opposition with the eye to winning 1-0.

And, it would be just reactionary enough to suggest that the sort of problems that plagued Canada in the 2015 Women’s World Cup looked to rear their ugly heads in the team’s early stages of the 2019 calendar. But, if you need a reminder, in 2015, Canada carried two players who weren’t at 100 per cent — Melissa Tancredi and Diana Matheson — and then ended up scoring just four times in five games. Canada never scored more than one goal in a match.

With attacking players like Janine Beckie, Deanne Rose and Jordyn Huitema now in the fold, and with Ashley Lawrence pushing up the wing and Jessie Fleming adding a dimension to the midfield, Canada has more options than it did in 2015. Yet, on Wednesday, despite having the bulk of possession — and Sinclair having a point-blank chance saved — there were hints that things were just a little bit… off. Crosses weren’t missing targets by a lot, but they were just a little too close to the keeper or maybe just a little behind the target player. When balls did find their targets in the penalty area, the reaction time was just slow enough to allow the Icelandic defenders the time to throw their bodies in front of shots.

It wasn’t a painful performance by Canada — and, for sure, this looked like a team shaking off the rust.

But, you didn’t come here for that. You came here to read that the sky is falling. So, look out! Piece of sky coming right at you!