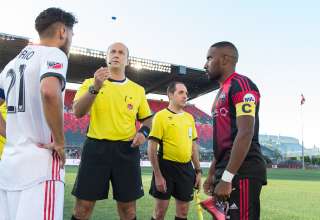 Toronto FC will be happy with an efficient 1-0 road win over the Ottawa Fury. The Montreal Impact, meanwhile, might not be so happy with its 1-0 home win over the Vancouver Whitecaps.

Wednesday saw both semifinals of the Canadian Championship get underway.

TFC has the advantage of a road goal over the Fury. The goal came in the fifth minute, with  Jonathan Osorio’s shot deflecting once and possibly twice off Ottawa defenders before beating Fury keeper Maxime Crepeau.

“We didn’t clear the ball like we should,” said Fury coach Nikola Popovic. “The ball bounced and Toronto did well to score the goal. But I think, after that, the game was even. I cannot say that there was one team who was dominating the other.”

The ball was squared to Osorio from fellow Canadian Ryan Telfer.

Outside of Osorio, the Reds left their big offensive guns at home. Even though the team has endured a wretched regular season and a Canadian Championship is now seen as a minimum requirement for a team that came within a penalty kick of the CONCACAF crown, coach Greg Vanney didn’t stretch the likes of Sebastian Giovinco or risk Jozy Altidore, who is in the process of coming back from injury.

But it was enough. The Fury had a couple of half-chances on free kicks from Kevin Oliveira; but neither forced TFC keeper Clint Irwin into a save. At the end of the game, the Fury pushed forward, and smashed ball after ball into the Toronto penalty area, but, time and time again, the Reds defenders blocked the attempts, not allowing anything to come through to trouble Irwin.

The Impact beat the Whitecaps 1-0 thanks to a second-half goal from Alejandro Silva. But, honestly, the Impact will be lamenting a bevy of missed chances in front of the club’s home fans.

Really, this semifinal tie should be all but over. The second leg in Vancouver should have only been a glorified friendly. But, thanks to the woodwork and some very good saves from Whitecaps keeper Stefan Marinovic, the Whitecaps survived a game that they deserved to lose by three or four… at least.

Canadian striker Anthony Jackson-Hamel put on a clinic when it came to wasting opportunities. In 70 minutes of action, Jackson headed a cross off the post. He blasted over the bar from inside the box. He forced Marinovic into a very good save. He hit a shot off the crossbar. Then, he put one in the net, just before being subbed off. Problem was, the flag was up for offside.

Jackson-Hamel could have scored five. And that’s not an exaggeration by any means. And you wonder, when the teams meet again in Vancouver, if the Impact will look back longingly and wonder “if only we could have shot straight in the first leg.”

Sure, Jackson-Hamel deserves credit for continuously getting into the good areas, of creating space for himself. But, in the end, a striker has one main job; to have the nerve and skill to finish the chances.

Silva’s goal came 12 minutes into the second half, and he smashed the ball in after Jeisson Vargas made a good pass to Saphir Taider. Then, Taider laid it off for Silva, placed the ball into the corner of Marinovic’s goal.

Cristian Techera had the Whitecaps’ only real good chance of the game. His cross floated towards the Montreal goal and struck the woodwork.

But it really was only one reply, a blip in a game that the Impact absolutely dominated. But, the Impact’s players can only blame themselves for throwing so many chances away, and allowing Vancouver a ray of hope for the second leg.