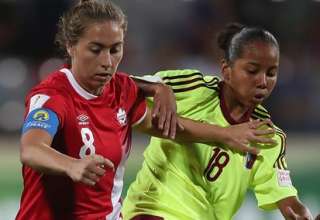 Canada’s time at the U-17 Women’s World Cup came to an abrupt end Friday.

After a comeback win over Cameroon and a very good 1-1 result against a powerful German side, all Canada needed was a draw against Venezuela to ensure a spot in the quarter-finals.

But, Canada fell 2-0 to Venezuela, despite being up a player for much of the game.

Really, it came down to Venezuela burying its chances, while the best Canadian attempts went off the woodwork.

Just five minutes in, Canada’s Lauren Raimondo made a great turn to elude a defender and put herself in great shooting position. Her shot came off the bar and out.

Venezuela took the lead in the 29th thanks to a wonderful effort from Deyna Castellanos. It was a goal so well-taken, that even the most hard-core Canadian fan had to stand up and salute the effort. She took the ball of her chest at the top of Canada’s penalty area. Her back was to goal. She settled it down, turned, shuffled to her right and then unleashed a 20-yard drive into the top corner.

Look, you get beat because of your defensive miscue, that’s hard to take. But sometimes, you have to applaud a great individual effort. And Castellanos scored a beauty.

But Canada’s hopes were revived in the 36th minute. Venezuela’s Nikol Gonzalez, already on a yellow, slid in late on Canada’s Vital Kats. Gonzalez saw her second yellow, and Canada would play the remainder of a game a player up.

Kats had a great chance to equalize, but her 61st-minute chip came off the bar.

And, despite being down to 10 players, Venezuela got the insurance marker in the 73rd. Castellanos forced Canadian keeper Lysianne Proulx into a diving stop, but Yerliane Moreno slid so she could make contact with the rebound, and the ball went into the corner of the goal.

Canada finished the game with just three shots on target – a disappointing tally considering the numerical advantage the team enjoyed for most of the game.