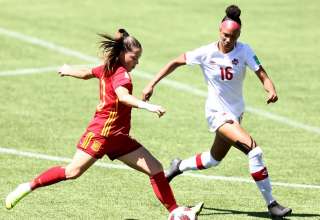 There are many, many excuses on offer for the Canadian team after the team closed its group stage of the U-17 Women’s World Cup with a 5-0 loss to Spain.

• Coach Rhian Wilkinson chose to rest several of her starters, as Canada had already clinched a spot in the quarterfinals. Group C was this tournament’s Group of Death and offered the likes of North Korea, Germany and the United States as possible opponents for the teams that came out of Group D. So, for Canada, the team knew it will be an underdog no matter who it’ll play in the knockout phase (for the record, it’s Germany). So better to rest players and protect those on cards rather than go all-out for first place in the group. Let Spain have it.

• As well, you could argue that Spain only had six shots on target in the game, but scored on five of them. That’s a shooting percentage much higher than the norm. And, the fifth Spanish goal went right underneath back-up keeper Kayza Massey.

• Not that she would have played anyway, but Canada’s best offensive weapon, Jordyn Huitema, was sitting out a red card suspension.

Those are the excuses. Now, let’s get to the worries.

• Canada is through, but allows far too many great scoring opportunities. Despite the fact that they shut out both Colombia and South Korea, the Canadians didn’t exactly look steady in the back. Remember that Colombia hit woodwork twice and couldn’t convert a penalty kick in the opener. On Wednesday, the difference was that they were punished for their errors. Irene Lopez scored twice, and Salma Paralluelo, Claudia Pina and Eva Navarro also put balls over the line. All three Spanish goals in the first half could have been described the same way;  a winger gets behind a static fullback, then is allowed all the time in the world to pick a pass into the penalty area. A Spanish attacker is left wide open near the penalty spot. She takes the pass and has time to convert. Canada left the door wide open for Spain. Sure, there were only six shots on goal, but four of the five goals would have been nearly impossible for any goalie to stop.

The second worry is that Spain represents a massive jump up in quality from South Korea and Colombia, and Canada was never at the races. Even with the starters back for the game against Germany, is a game against another elite European side a bridge too far? Germany throttled the United States 4-0 Wednesday in a game that the Americans absolutely had to have. The Americans, by the way, are going home from Uruguay after the group stage.

I guess, no matter what happens now, Canadians can say that we lasted longer in this tournament than the Americans did.