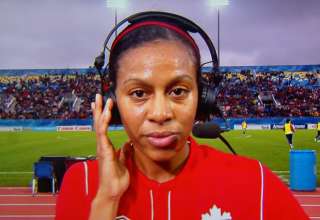 One of Candace Chapman’s proudest moments was being part of the 2012 Canadian women’s national team that won bronze at the London Olympics.

The 2018 Canada Soccer Hall of Fame inductee ranks that right up there with the 2011 Women’s World Cup opener in front of more than 73,000 in Berlin, and getting the call from then-coach Even Pellerud to play for Canada in the 2007 WWC.

All in all, 114 caps for Chapman, who now runs a private coaching business in Maryland.

But, going back to that Women’s World Cup in 2011, Chapman recalls how low the team was after finishing last in the field. Yet, under new coach John Herdman, the team healed and was able to get to a podium just a year later.

And she thinks Herdman, appointed as the coach of the men’s national team earlier this year, can help build that program in much the same way he was able to find a way to bring the women’s program from lowest low to highest high.

“Of course, losing him is a blow for the women’s team,” she says. “He meant a lot to us, and he’s a fantastic person. But he’s the type of coach who us going to have success wherever he goes.”

Chapman had ups and downs in her club career, as well. Not because of her performances on the field, but because of the volatility of the women’s professional game. She was part of FC Gold Pride team that ran out of cash and folded. She saw the WPS, the precursor to the NWSL, pull the plug. By the time the NWSL was launched, she was in her 30s. She played for the Washington Spirit at the tail end of her career.

But she’s excited for what North American pro soccer holds for the next generation of Canadian players. NWSL has also seen franchises fold and franchises move, but, compared to leagues that came before, there’s no comparison in terms of stability.

“I think the women’s game has grown a lot,” she says. “It looks sustainable, now. The quality of the players in the league is fantastic.

“Even back when I was playing for FC Gold Pride, there was always a sense of hope because we knew the quality was there.”

After hanging up her boots, Chapman was coaching in the Canadian youth ranks, but has since opted to move into private coaching. The appeal of being able to call one spot home, after years of traveling, was simply too appealing. After a career filled with hotel stays, plane tickets and buses, for Chapman it’s nice to have a home address.

She’ll be honoured in a ceremony along with fellow inductee Tomasz Radzinski later this year.