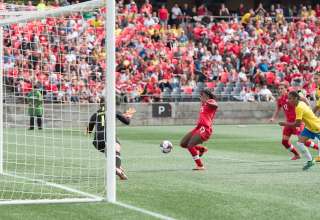 In terms of entertainment value, Sunday’s friendly between Brazil and Canada, in front of more than 16,000 in Ottawa, was a dud.

But, as Canada preps for the CONCACAF championships — this region’s qualifiers for the 2019 Women’s World Cup — maybe this scrappy 1-0 win was exactly the kind of game that was needed. The Brazilians hacked. They whacked.  The game had very little in terms of flow.

When it comes to tournament football, you’re going to have these kinds of games. You’re going to have to be able to take advantage of maybe a set piece and, well, survive. The mark of an elite team isn’t that it can win by multiple goals when everything is going right; it’s that it can come up with three points when things aren’t going well.

“We wanted to score a goal and get a win for the fans here in Ottawa,” said coach Kenneth Heiner-Møller in a release from Canada Soccer. “Defensively we were very, very good. We didn’t let them have any joy between our lines, which is what we wanted, to close down on the ball.”

Nichelle Prince got Canada’s winner early in the second half. Prince was in the perfect spot to score after Kadeisha Buchanan was able to get the first touch to a Janine Beckie free kick. It was a suitably scrappy goal for a scrappy game.

Really, though, credit has to go to Beckie for drawing the foul that led to the free kick. Camila, the Brazilian left back, should have been able to clear a ball that was lofted in towards her. But Beckie harassed Camila, won the ball, and the Brazilian defender by responded by hugging the Canadian.

Canada, throughout the game, attacked Brazil down the wings, and while the likes of Ashley Lawrence and Allysha Chapman were able to make some runs down the side, the crossing and passing simply wasn’t there for the Canadians.

And, when the Canadians were able to put passes together, the Brazilians, well, weren’t very friendly. Both Chapman and Buchanan can consider themselves fortunate to not have suffered injury after both were victimized by rash, late challenges from Beatriz, the Brazilian who really should have been sent off for her actions.

Beckie left the game after an aerial challenge, and Canadian Julia Grosso also survived a late challenge from Andressa.

At times, the Brazilians looked more intent on taking out Canadian players than they were in playing the ball.

But, this is going to happen in CONCACAF qualifying, too. Teams are going to be hacking Canada’s players right from the opening whistle. And, you have to deal with it.

The two teams will meet again Tuesday in a closed-door match.