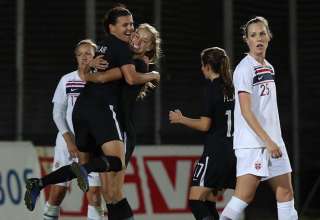 Christine Sinclair’s 178th career international goal was enough to get Canada’s women’s team a 1-0 win over Norway in a friendly Tuesday in La Manga, Spain.

For the most part, thought, it was a less-than-inspiring effort from the Canadians who were fortunate not to be down to the Norwegians by the halftime break.

Oh, who am I kidding? We all want to talk about the new Nike kits, right? OK, let’s get it out of the way. This was the first Canada “A” game of any sort since Nike took over from Umbro as the official gear supplier to the various Canadian national programs.

And, Canada came out in an, ahem, all-black Nike kit, save for white stripes down the sides of the shorts.

Canada has worn black kits before; in the late 1990s the team had an Umbro black kit, but it was filled with red accents and detailing, including taping across the shoulders with “Canada” repeated on it.

But today’s kit was, well, underwhelming. It was as if Nike was like “quick, we need to get Canada a kit in time for this January friendly!” and sent a couple of boxes of generic black shirts and shorts to Spain.

OK, back to the game, one in which Canada was lucky not to be down a goal or two to the Norwegians by halftime. The Norwegians came with the high press game, and were able to force the Canadians into long periods where they struggled to connect more than three passes together.

And, thanks to two simple passes that split the Canadian defence wide open, Caroline Graham Hansen had a breakaway chance for Norway, but keeper Stephanie Labbe got enough of an outstretched foot on the shot to deflect it wide by a matter of inches.

The sustained Norway pressure led to another good chance, with Labbe forced to make a near-post diving stop on Emilie Haavi.

After coach Kenneth Heiner-Moller made a series of second-half subs, Canada was more composed, and it was newcomer Jenna Hellstrom who made the telling play, a perfect cross to the box for Sinclair to head just inside the post.

All in all, with the World Cup just five months away, it wasn’t a confidence inspiring effort from the Canadians, with too many unforced errors, too many loose passes, too many short passes. But, Canada got away with it. Come France in June, an effort like this will be duly punished.

We can blame the jerseys.