May 21, 2022
9 New Articles
Home Canadian Premier League CanPL News and Notes Would the last one to leave Fresno, please turn out the lights? 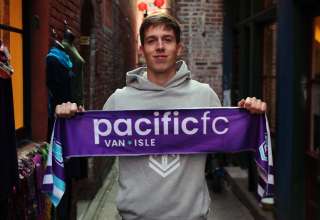 The exodus of former Vancouver Whitecaps prospects who played for Fresno in 2018 continues. On Monday, Pacific FC announced the addition of midfielder Noah Verhoeven, who becomes the third ex-Fresno player to join the ranks, joining Matthew Baldisimo and Terran Campbell.

Also added to the Pacific FC roster is keeper Mark Village, who spent last season with FC Cincinnati  but didn’t get into a USL game with the club.

Verhoeven is a dual Canadian/American citizen who had been part of the U.S. youth program before changing his allegiance to the Canadian set-up in time to play at last year’s Toulon tournament. He got 1,085 playing minutes for Fresno in 2018.

The Whitecaps affiliated with Fresno ahead of the 2018 season, after the MLS club folded its WFC2 side. Five Canadians played for Fresno last season, and three of them are now with Pacific FC.  The other two weren’t part of the WFC2 set-up before the Fresno switch.

When the Whitecaps hired Nick Dasovic as the team’s U-23 development squad’s coach, a footnote to the release was that there would be no affiliation with Fresno in ’19. (Corrected from original draft)

“Noah is one of Canada’s top young talents,” Pacific FC CEO Rob Friend said in a release. “He not only brings professional experience, but as the captain of our youth national team, he’s bringing tremendous leadership qualities and we are very fortunate to have secured his services.”

Village was team MVP of the University of Fraser Valley before moving to the Whitecaps.