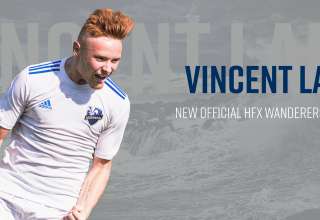 Simmons came out of the Ottawa Fury’s youth system and made the move to Malaga in Spain, before spells with Dalkurd’s U-19 side in Sweden and Mikkelin in Finland. In 2015 and 2017, he was invited to Canada’s U-20 development camp.

As a member of the Montreal Impact Academy, Lamy scored 25 times in 24 USSDA games this past season. But, despite his strike rate, the Impact decided not bring him back into the club’s fold for 2019.

“Soccer is about opportunity, and the Impact didn’t need me right now,” said Lamy. “I hope that the opportunity comes that they are going to need me.”

And if he wants to make the Impact lament what the club has lost, he knows he’ll need to impress in the Canadian Premier League. Lamy describes himself as a fast player “who can not only score goals but has good vision.” He says he is also willing to create scoring chances instead of simply being happy poaching goals.

“One of the things that attracted me to these players is their enthusiasm and desire to be professional players, that intrinsic motivation cannot be taught,” said Halifax coach Stephen Hart. “These are the type of players we want, young and enthusiastic players, who love the game.”

Lamy said that, after chatting with Hart, he realized that Halifax was the place for him to go.

“After talking with Stephen, he made me have great confidence in him,” said Lamy. “I like the way he sees things. It was an easy choice to come to Halifax.”