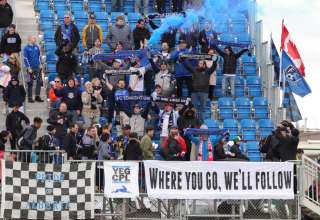 A near-capacity crowd at Clarke Field saw a rather one-sided “Al Classico” — as Calgary Foothills defeated an FC Edmonton Academy side that also featured a number or returning veteran players by a 4-0 scoreline.

Really, the result wasn’t unexpected. The Foothills team is just weeks away from the start of its PDL campaign, while many of the FCE players didn’t look like they were all too familiar with each other on the field.

But, for soccer fans in Alberta, this was a lot more about than a single exhibition game. This “Al Classico” match was a platform to promote the Canadian Premier League, which kicks off in 2019. It was a way for FC Edmonton to prove to an often cynical sporting community that, if the Eddies can play against local rivals, the fans will come. The Eddies are currently looking to secure Clarke Stadium — a piece which will determine if FCE, which played in the NASL from 2011-17, will return as a CanPL side in 2019.  According to documents from City of Edmonton administration, the CanPL requirements include an increase in seating capacity to 7,000 and a guarantee that FCE would be the primary tenants in the city-owned facility. Minor football groups are opposing the Eddies; so, in the battle for hearts and minds (and political capital), there was a clear message in an exhibition game that came close to filling the stands on a blustery Sunday afternoon.

And, for the Eddies, it was a chance to bring back some familiar faces to mix in with the Academy kids. Shaun Saiko, who is the No. 2 goal-scorer in FCE’s NASL history, played a half. Paul Hamilton, a former NASL Best XI defender with the Eddies, played an hour. The alumni party continued with the likes of Sam Lam and Edem Mortotsi in uniform. FC Edmonton promoted what could be an exciting future as a CanPL team by paying respect to its NASL past.

And, for former FCE captain Nik Ledgerwood, he had the chance to return to Clarke as a member of Calgary Foothills.

Saiko said that he hadn’t played an outdoor soccer game in two years. For Hamilton, he’s barely been outside for a soccer game in 2018; he’s still coming off a season at indoor amateur soccer.

“Shaun still has it,” said FCE Academy coach Jeff Paulus. “And I brought Shaun in here for a couple of reasons, and Paul Hamilton, too. Number one: When I came to this cub, those were players who really accepted me as the second assistant… I was not a young coach, but I was certainly a young professional coach. I leaned on guys like that at the time, because they were the professional players and I had a lot of respect for them, and I still do. Bringing them here today was to help lead the team but also I knew there was going to be a lot of people here, and those people love Paul and Shaun, rightfully so. I wanted to give that back to everybody, and I wanted Paul and Shaun to have their day.”

Both Hamilton and Ledgerwood said that it wasn’t lost on them that the crowd for the Calgary-FCE Academy exhibition game — albeit with free tickets — was larger than crowds they played in front of for FCE games at Clarke.

“I think it just shows that the rivalries are more important than the league,” said Ledgerwood. “I said to some of our guys that’s probably a bigger crowd than we got a lot of the time in NASL. So, I think, going forward to the CPL, that’s what it’s going to be about. Rivalries.”

But, once the game started, romance gave way to reality — as a Foothills team that’s nearly set to kick off the PDL season poured it on.    It was one-way traffic throughout the first, as Foothills pressed and pressed. That pressure forced an FCE backline corps that wasn’t familiar with each other into mistakes.

A poor back pass from Mason James was picked off by Calgary Foothills’ forward DuWayne Ewart, who made no mistake. Then, before the game was seven minutes old, it was 2-0. Hamilton made a nice slide tackle to stop a scoring chance from Ali Musse; but the Calgary Foothills forward was able to recover the ball, then slam a shot home.

Musse was inches away from a second when his free kick crashed off the post.

Ewart and Musse are perfect illustrations of the kinds of players who would benefit from the Canadian Premier League. Musse spent time in the Vancouver Whitecaps Residency and Ewart is an alumnus of the USL’s Pittsburgh Riverhounds.

In the first half, FCE used a mix of vets and young prospects, and Academy players took over for the second 45.

Jackson Farmer, an Edmonton native, made it 3-0 in the second half with a shot from the top of the penalty area. Tofa Fakunle made it four as he tapped the ball in off a goalmouth scramble.

Prince Amanda, brother of Gloire Amanda, who suited up for WFC2 last season, had a good chance to get one back for FCE, shooting wide after a ball came off the post.

Canadian women’s national team keeper Stephanie Labbe, a native of the Edmonton area who’s on trial with Foothills, came into the game in the 79th minute. Labbe was a member of the Edmonton Aviators side that played one season in the W-League in 2004. Labbe had to scramble to grab the ball off the feet of Edmonton’s Decklin Mahmi before he was able to unleash a shot towards goal.

In the 89th, Labbe was beaten on a shot from the right wing that came from the foot of David Doe, who got into some NASL games with the Eddies last season. The rebound came to Mahmi, and Labbe recovered in time to push his effort over the bar.

There, you saw it. Someone from a Calgary team saying something nice about in Edmonton. If Wheeldon and Paulus become CanPL rivals in 2o19, maybe there won’t be so many post-game pleasantries…