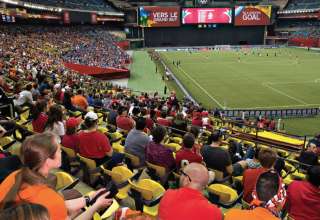 Montreal is an event town. And that was shown to be true during the Women’s World Cup, where attendances were small for early games not involving the likes of Canada or the United States. But, when the games grew in importance, so did the crowds at Olympic Stadium

Montreal is not a sports town. Heck, it’s not even a good hockey town. It’s a Habs town. Sport-wise, everything takes a back seat to the Canadiens no matter what the calendar reads and regardless of whether the team is actually still playing.

Furthermore, Montrealers do not like the Olympic Stadium and haven’t since the curtain came down on the 1976 Games. It cost over a billion dollars to build and has been falling apart almost since the day it opened to the public. Roofs come and go, each more expensive than the previous and significantly sized chunks of concrete have been known to obey the call of gravity from time to time.

A baseball team once played there, but it doesn’t any longer. The ownership of said team managed to persuade its fans that theOlympic Stadium was not a worthy venue for a Major League Baseball franchise but failed to convince anyone to build them a real, conveniently located, open-air ballpark. The Expos beat it out of town to friendlier climes.

Montreal is, however, an event town — the large numbers that came out for the CONCACAF Champions League final is proof of that — and the Women’s World Cup was an event.

But, the early Montreal matches were not particularly well-attended. FIFA announced a five-figure attendance number for the double-header on June 9 that began with a Spain-Costa Rica match and later had Brazil taking on South Korea; but the number of fans in place for the opener appeared to be a lot closer to the 2,000 or so die-hards the Expos drew in the end days. Roughly twice as many were there to watch the closer.

June 13, a Saturday, brought a legitimate five-figure crowd out as Brazil defeated Spain and Costa Rica and Korea Republic played to a 2-2 draw in front of almost 30,000.

Canada played its first two games to packed houses in Edmonton. Its third outing was scheduled for Montreal. June 15 was a school night but there were more than a few sleepy students in local schools the next morning, as 45,420 fans turned a concrete mausoleum into a pretty happening place for the final match of the opening round against the Netherlands.

Let’s face it; the province of Quebec is not big on red, with the exception of the colour’s connection to a certain Montreal ice hockey team. Much of La Belle Province’s population considers themselves to be Quebecois, not Canadian, and rally to banners of blue. Those who lean to the red side of the spectrum tend to be a fair bit more low-key about the colour but, on that evening, in that venue, red was trending and it was not associated with anything having to do with ballot boxes.

As the Metro disgorged trainload after trainload of fans at the Pie IX station, they streamed up the passageway to the Olympic Stadium rotunda, a red tide, hundreds at a time in three-minute intervals.

Those who were not sporting official team wear had donned something red for the occasion. There were Team Canada hockey sweaters in abundance as well as all manner of red soccer shirts, ostensibly representing everything from top-level pro teams to local girls’ leagues, but on this night expressing visible support for Canada’s women.

Canadian flags became capes and there were red cowboy hats in abundance along with red scarves and red face paint. Lots of face paint. The colour red has probably not been so widely seen in Montreal since 1994, when airlines decided to fly folks from across the country to Quebec to have them wave the flag just before the province’s last referendum.

Fans in attendance were rewarded with the opportunity to be able to claim they witnessed a pivotal moment in Canadian soccer history, the match that signalled a passing of the torch, from one generation of women to another. Coach John Herdman did not or could not start a number of team stalwarts, among them Diana Matheson, Desiree Scott and Melissa Tancredi. He did send out youngsters or relative newcomers Kadeisha Buchanan, Ashley Lawrence, Jessie Fleming and Allysha Chapman.

The match ended drawn — with each side scoring once and theNetherlands’ Kirsten Van De Ven, who evened the mark in the 87th minute, named player of the game — but the crowd had a lot to cheer for and, by and large, went home happy. After all, Canada did enough in that game to clinch the group.

Lawrence scored 10 minutes in, with the crowd testing the Olympic Stadium’s structural solidity with their reaction, and was dangerous almost every time she had the ball, regularly bypassing Dutch adversaries in her attacks.

Buchanan lived up to her recent billing as the next best middle defender in the women’s game. Virtually flawless in her technique, she regularly dispossessed opposition attackers and sent the ball forward to teammates, nullifying serious threats with flawless sliding tackles inside the penalty area.

”I’m an Impact supporter and I’ve been to that awful place many times,” said Steve Jenkins, an active poster on the Voyageurs online forums who played for Concordia University in the 1980s and attended his first Team Canada match in 1997. “I was surprised at the how much the people were into it. People were dressed up and painted their faces. It was a real love story. They were really a happy bunch of people and, of course, they cheered from the first minute on. I was very impressed with the crowd.

“I was sitting beside a woman and her young daughter. They had a sign with [Christine] Sinclair’s name on it. Then the husband came. It was a real family affair. I was surprised at how many people came from out of town, from Ottawa and Ontario. It was hard to find anyone speaking French. It was a great ambience. It was really positive.”

France and South Korea played a Round of 16 match in front of a respectable 15,000 fans before the June 30 semi-final match pitted the United States against Germany. Montrealers proved to be perfect hosts and stayed away in large numbers as the Olympic Stadium became de facto U.S. territor  for a few hours, with the vast majority of the 51,176 fans in attendance enduring up to a two-hour wait at the border on their way to the match before being subjected to the traditional long, slow, entry process for big events at the Olympic Stadium.

Once everyone got in it was “USA! USA! USA!” all night long and the “home side” came out on the right end of a 2-0 score.

With Toronto’s prior commitment to the Pan Am Games, the inclusion of Montreal as a host city became essential to the success of the tournament. There weren’t flags of many nations in great abundance on motor vehicles; the sports bars were not being overrun with soccer fans intent on watching the Women’s World Cup.

But, Montreal held up its end and the stadium was filled, almost to capacity — for the matches that mattered.

Less than a week after the Big O hosted one of the semifinals, Tourisme Montréal launched a campaign promoting the city as a destination for world-class sporting events. It declared July 9 Canada Olympic Excellence Day.

“Montréal is a major sports city and has everything it takes to host a wide range of sports events: modern installations, skilled trainers and high-level athletes, all matched by its first-class hospitality and the inimitable joie de vivre of Montrealers,” said Bianelle Legros, manager of sports marketing at Tourisme Montréal.’

Perhaps the city ought to be placed on the list of sites that could or should host an international match featuring one of this country’s national sides against, for instance, the Americans. Montrealers would turn out for that one, whether the Habs were playing or not.