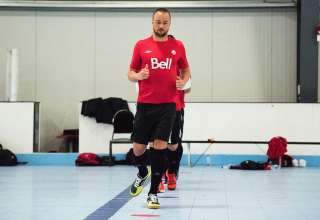 But, where is futsal?

That’s the question that befuddles me. Our national men’s futsal side roared back to beat the United States in a CONCACAF qualifier, then got to within one game — one half, really — of getting one of the CONCACAF slots at the Futsal World Cup. Canadian Freddy Moojen won the Golden Boot for scoring the most goals at the CONCACAF Championship. And goalkeeper Josh Lemos’s inspirational goalkeeping held Canada in games, and he became a folk hero to those of us who love to share our Canadian soccer stories on social media.

Really, if Lemos doesn’t win save of the year for his ridiculous stop against Costa Rica in the CONCACAF Championships, in which he snuffed out a two-on-none break, well that would be a crime. OK, maybe not a full-on crime, but an injustice, for sure.

And, the players I’ve mentioned are playing professionally in the Major Arena Soccer League, so it’s not like they do it only for Canada.

So, until Canada Soccer creates an award for Canada’s top futsal players, something which is overdue, I fully plan to put a write-in candidate — a futsal player — on my men’s player-of-the year-ballot. It’ll be my little way of making my voice heard.