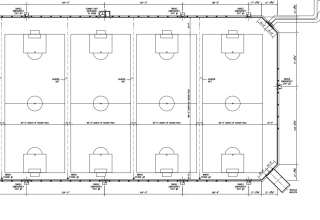 From the City of Hamilton's agenda: The blueprint for a covered Tim Hortons Field.

I’ve heard the stories of the guy who, in fact, wanted to start a rival Canadian league (to the one being rumoured) and was contacting the movers and shakers about his bold plans. It was all so confusing; rumoured league one, and then pie-in-the-sky league two. And the aggressive nature of league two was hurting the credibility of league one.

I’ve heard whispers about CFL owners being involved, then not involved, then involved again. I’ve heard about cities that appear, drop out, appear again. And I am sure if I held a round table with all of Canada’s soccer writers, we could swap some pretty interesting stories about the rumours we’ve heard. In fact, the Canadian league might be the best-ever game of broken telephone ever played.

What we simply know, on the record, is that the NASL’s FC Edmonton isn’t interested in joining. And, in the past, Canadian Soccer Association President Victor Montagliani has said his vision is that a new Canadian league would be seen as a Division “1A,” one that would co-exist with the Canadian teams that already play in MLS and NASL (CLICK HERE).

It’s time, though, for the rumour mill to stop. On Wednesday, John McGrane met with the City of Hamilton’s General Issues Committee to talk about his plans to, well, put a bubble over Tim Hortons Field in the winter — and subdivide the real estate into five soccer fields. In the course of his discussions, he spoke about Hamilton Tiger Cats owner Bob Young’s plan to put a team in this upcoming Canadian professional league.

Of course, Bob Young’s name was once linked to a rumoured Hamilton NASL expansion team — and he was a partner of the Carolina RailHawks’ ownership group from 2009 to early 2011.

Now, of course, Canadian soccer fans are all talking about these little droplets of information that came from McGrane, a former NASL player, because, as is the case with what happens at civic public meetings, it got into the local newspaper — in this case, the Hamilton Spectator (CLICK HERE).

This is not how a league is launched. For the first real public pronouncements about the Canadian league to come from a debate over who puts bubbles over fields looks bad on basically our whole soccer establishment. What the investors in said Canadian league need to do now is to get ahead of this story — it’s about time for the rumours to end and some sort of public acknowledgement to be made. If a PR person isn’t in place, hire one. Now.

Instead of a grand announcement — where fans will know exactly what to expect from a league, we’ve got a rumour mill and the minutes of a Hamilton committee meeting.

This league needs to show Canadians that it will be fully professional (not semi-pro), that has investors in multiple regions, and that it is real. It’s too late for the keep-quiet plan; as of Wednesday’s committee meeting in Hamilton, that’s out the window.

Let’s face it. We all want a Canadian soccer league to succeed. But we’re terrified of it becoming another Canadian Soccer League or a semi-pro league run by mattress-warehouse owners who “are big fans of the game” but overstate their financial commitment to a pro team — despite McGrane’s assertation that CFL and NHL money is in the mix. This is NOT a good beginning. It’s time for the REAL owners to stand up.