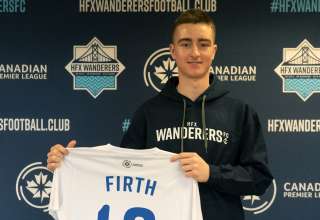 One of the great tests of the success of the Canadian Premier League will come in Atlantic Canada.

No, I’m not thinking about the crowds and supporters’ culture that is taking root in Halifax — that’s a separate conversation. In this case, I am looking forward to a future where we see more young prospects from the Atlantic provinces invited to national-team identification camps; more players from the East who become the topics of national conversations.

When Halifax Wanderers are regularly fielding players who grew up in the region, whose first answers to interviewers aren’t “I’d never been to the city before this.”

“It’s a great feeling especially being local,” Firth said in a release. The fact I grew up here, to be playing pro soccer in front of faces I know and see on a daily basis is something to dream of.”

Firth won three Atlantic Canadian titles with the Nova Scotia provincial side. He also spent time with the Whitecaps Residency and auditioned for Toronto FC’s program.

Cavalry FC announced the signing of Jordan Brown, an English player who came up through Arsenal’s youth system and has also spent time with West Ham United. This past season, he was in the second division of the Czech League.

Brown is a former England U-17; he made seven appearances for the Three Lions’ U-17 squad, and scored three times.

“He’s had an excellent development path at some respected European clubs,” said Cavalry coach Tommy Wheeldon. “As a young player in England’s U-17 team, he was highly touted as one to watch for the future and we still believe that.  He’s the type of centre forward we’ve been looking for, a different maker that’s young, pacy and clinical with his finishing.”