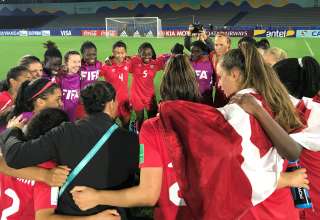 Soccer tournaments can be totally topsy-turvy affairs. A team can look dominant one day, then flat the next. And vice versa.

Germany won Group C at the U-17 Women’s World Cup, and that included a 4-1 win over North Korea and a 4-0 destruction of the United States. The Germans were clear favourites to beat the Group D runners up from Canada in their quarter-final match Sunday in Uruguay.

The Canadians, though, tore up the script. Jordyn Huitema scored the late decider as Canada triumphed 1-0. But, maybe most impressive is the number of shots on target that Canada allowed in the match. Through 90 minutes plus injury time, the Germans managed just one shot on target.

I’ve criticized Canada through this tournament for getting away with some defensive miscues; think back to the team’s opener against Colombia, where the South Americans had a couple of efforts go off the woodwork and didn’t convert a penalty. But, on Sunday, there can be no such criticism. The Germans could move the ball laterally, but Canadian keeper Anna Karpenko could have gone on a sightseeing tour of Montevideo while the game was on.

It also shows that we could take absolutely nothing from Canada’s final group-stage game, a 4-0 loss to Spain, who also advanced to the semis with a penalty-kick win over North Korea. Coach Rhian Wilkinson chose to rest many of her starters for that game, basically forfeiting a shot at first place in the group. Resting her group was more important. And she was absolutely right.

Kaila Novak’s perfect cross found Huitema for the winner, an inspired moment for the Canadians, who now have a date with Mexico in the semis. Meanwhile, Germany’s Shakiera Martinez, who scored twice against the Americans,  had a meaningless hour on the pitch for the Germans.

Canada is now one game away from a final.