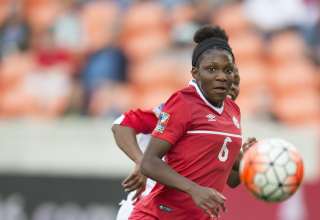 Coach John Herdman decided to change things up a little bit for Friday’s Olympic bronze-medal match; he put teenager Deanne Rose into the starting lineup, in place of Janine Beckie.

Rose would score the opener and set up Christine Sinclair’s marker as Canada got to the podium with a 2-1 win over the hosts from Brazil.

Let’s be absolutely clear; while the result in 2016 — third place — was identical to what the Canadian women’s national team accomplished in 2012, it’s clear that this edition of the squad was markedly better than the team from four years ago. The Canadians lost just one of six games in the tournament — and Herdman and his charges will be able to boast that they beat several of the so-called top-tier sides along the way.

They beat Australia, despite being down to 10 players for more than three-quarters of the match. They knocked France out of the tournament. All things being equal, if you put the 2012 team against the 2016 team, you’d expect the 2016 edition to win.

This side has made significant strides forward since the disappointment of that loss to England at the 2015 Women’s World Cup.

The fact that such impressive performances were turned in by youngsters — from fullback Ashley Lawrence to midfielder Jessie Fleming to Beckie to Rose — bodes well for a program that, just four years before, was starved for young talent.

The opening goal was created by two of those young phenoms. After Canada cleared a Brazilian free kick, Lawrence burst up the left wing with the ball at her feet. She absolutely blew past Brazilian right back, Fabiana. It looked kinda like the Roadrunner going past Wile E. Coyote. All Fabiana needed was a stick of dynamite in her hand and Acme anvil tied around her ankle.

Lawrence kept her composure and slotted the ball across to Rose, who slammed the ball goalward. Barbara, in the Brazilian goal, got a piece of the shot, but couldn’t keep it out.

Fleming and Rose then helped Christine Sinclair celebrate her 250th cap in style. In the first half, Sinclair blasted a free-kick off the bar. But, in the second half, she was able to slot home after a nifty series of passes. First, Fleming found Rose in the penalty area with a well-placed through ball, then Rose squared the ball back to Sinclair. Canada’s all-time leading goal scorer showed some veteran guile by taking a touch to make sure the ball settled before stroking it into the goal.

Soon, after, Rose would join Sinclair in the post-and-goal club, as she put an effort off the upright.

In the 66th minute, Lawrence went another of her rampaging runs, this time off the right wing. She turned towards goal, and her effort was just kept out by the fingertips of Barbara. A rebound was scrambled away just before Sophie Schmidt could arrive to tap it in.

But, would those posts come back to haunt Canada? That was the question after Beatriz made it 2-1, after Canada didn’t deal with a throw-in into the penalty area. Beatriz got ball side of defender Shelina Zadorsky, turned and was able to place her shot inside the post.

It was as close, though, as the hosts would get. And Canada can look back at a tournament where it finished with five wins out of six games.