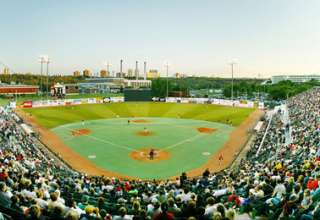 Is there a new home in sight for FC Edmonton?

He said that the club may also want to have a look at Re/Max Field, the close-to-downtown baseball facility that holds 9,200. It’s the former home of the Pacific Coast League’s Edmonton Trappers, but currently houses the Edmonton Prospects, an elite amateur team that plays in May, June and July.

“(Edmonton) is pretty close,” said Clanachan. “We’re looking at the facilities. As you know, when you’re going to do a new club and you need a place to play, you need somewhere to call home. It’s got to be right for the fans. You need a good experience for the fans and it needs to set up properly with the actual club itself. We’re working through that right now. Certainly there are some issues with the existing facility that FCE uses today. We’re working through that. At the end of the day (Clarke) doesn’t necessarily check off all the boxes that the league wants, but having said that, maybe there are some other venues that we could use in the city. I think of the old baseball stadium. I just love that field. I love what’s happening there. And I love the position of it, and I think it does check off a lot of the boxes. We just need to work through that with the city and the club and make sure it’s the right thing for fans and engagement in the city.”

As members of the NASL, FCE called Clarke Stadium home from 2012-17. Owners Tom and Dave Fath purchased stands to nearly quadruple the capacity of the stadium to just over 4,000. But, the city owns the facility and FCE was a tenant. That meant FCE had to schedule against minor football and Eskimos practices — and other community users. FCE would not get first right of refusal on dates, even if television was involved.

The team suspended first-team operations in 2018, but are working towards re-launching the first team in the new CanPL, which is set to kick off in 2019. CanPL requirements are for stadiums to have capacities of at least 7,000 and for their teams to be primary tenants of those stadiums. Those proposals, when recently brought to City Hall, received significant push-back from minor football and the CFL’s Edmonton Eskimos, who have a multi-year agreement in place to use Clarke as a practice facility.

So, enter Re/Max, which already has the capacity needed.

“Why not?” asked Clanachan. “We’re looking for the right place to play that’s going to be great for the fans and for the supporters and for the team.”

But Tom Fath was far more cautious when talking about the baseball stadium.

Clanachan said he wasn’t worried about a CanPL vs. football narrative changing to a CanPL vs. baseball story.

“It’s not a battle of one versus the other. The city’s a great city. It’s a sports city. We want to fit in. We want to move in, we want to be a good neighbour.”

In terms of the talks over Clarke, Clanachan said that FCE’s brass is having good discussions and “the City is trying really hard to work things out. There’s a lot of support for professional soccer in this town.”

WHAT’S NEXT: After Friday’s Edmonton meetings wrapped, the ownership groups and CanPL execs began their treks to Yellowknife, site of this year’s Canada Soccer Annual General Meeting. Clanachan said many of the teams are up for sanctioning at the meetings.

How many ownership groups met behind closed doors? Clanachan smiled and said “more than eight.” He said the league is still on track to kick off with 8-10 teams in 2019, and that team announcements are set for one per week over the next six to seven weeks.

AL CLASSICO: Clanachan said that all the staff at CanPL headquarters in Toronto were paying close attention to the first-ever Al Classico. Last Sunday at Clarke, Calgary Foothills’ PDL squad faced a group of FCE Academy players along with some returning veterans. More than 3,000 people came to the free event.

The teams face each other in Calgary on Saturday.

“It  was amazing,” said Clanachan.” Everybody at the office  was talking about it. It was a great event and you could see the passion is there. And so, we’ve just got to keep building on that passion and it’ll work well.