January 21, 2022
9 New Articles
Home MLS More MLS We watched the MLS Superdraft so you didn’t have to 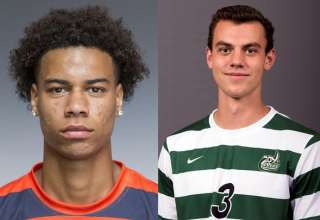 First, before I write this, in the spirit of the MLS Superdraft, I’m gonna call a timeout right off the bat.

What can I be thinking about right now?

Didn’t I know what I was going to do right off the bat?

Wait, think I got it.

OK, I think I can start now.

So, if you could make it through the marathon of men in suit and ties calling timeouts, the trading of GAM and TAM, the flipping of picks, you might have noticed that five Canadians were selected in the first two rounds of the 2019 MLS Superdraft.

Or, maybe you had a better way to spend your Friday than watching a draft, which is frankly, the most boring thing in the world. Following the results of drafts is one thing, but watching people walk up to a podium and wave scarves, with the whole process slowed down to a crawl by timeout after timeout, it’s mind-numbingly dull. If the real reason the Philadelphia Union traded all of its draft picks away was so the staff wouldn’t have to sit through hours of this, well, can’t say you can blame them, can you?

But it’s the results of the draft that are important, not the hemming and hawing and photo ops and the GAM/TAM trades we’ll all forget by tomorrow.

So, onto the five Canadians. (None of whom were picked by Canadian teams.)

Callum Montgomery, who was a PDL standout with the Victoria Highlanders, was taken fourth overall by FC Dallas. Montgomery is a six-foot-two centre back who also has a bit of offensive upside; he scored three times and added four assists in 21 games this season for the University of North Carolina-Charlotte. Those are decent returns for a defender.

Dayne St. Clair has played in the Canadian U-20 program, and was rated as the top keeper in the draft. The University of Maryland product went seventh overall to Minnesota United. He’s a raw prospect who will need some work — but that’s true of most goalies who come out of university.

Now, before I get to the next three, I’m gonna take another timeout. I’m like that annoying guy who runs a team in your fantasy draft, who takes up a whole table to himself thanks to all his magazines and cheat seats, and takes five minutes to make a pick. He hems and haws from the first round on. Every time it’s his turn to pick, you roll your eyes. And he finishes in last place. Year after year. Despite turning your draft into a five-hour ordeal and carrying a library on his back, he makes a hash of his picks. Always. You wouldn’t put up with him, but he’s easy money.

Tajon Buchanan, from Brampton, Ont. (basically our soccer capital) slipped to nine, where he was taken by the New England Revolution. Buchanan is a speed burner with the kind of raw athleticism that MLS GMs love.

Another Syracuse Canadian, centre back Kamal Miller, went 27th overall to Orlando City, a team that has drafted its fair share of Canadians in the past (Cyle Larin, Richie Laryea). A Canadian defender from Syracuse may give you visions of Skylar Thomas or Jordan Murrell — also Orange alumni — but we’ll see how Miller fares on a team that needs defensive help, badly. But Orlando City has a track record of giving Canadians chances.

MLS playoff revamp: The good, the bad and the ugly