December 06, 2022
9 New Articles
Home Global Game Africa United 2026 bid now the underdog as Morocco will be on the June 13 ballot

Just a little more than a year ago, when the United 2026 bid was made official, it felt like CONCACAF had what amounted to a sitter at its feet. A tap-in. There was no way a push to bring a World Cup to the United States, with a little help from Canada and Mexico, could fail, right?

Now, with FIFA’s decision on Friday to allow the Morocco bid to stand against United in the June 13 vote for the 2026 hosting rights, it has all changed. No doubt about it — United is the clear underdog. It is now Morocco’s World Cup to lose.

How is it unravelling for the United bid?

Well, first off, the term “United” has been proven to be a total crock. The three bidding nations are now in the throes of a trade war. American President Donald Trump calls Canadians spoiled and then refers to Mexican in so many negative ways, it would take an entire column just to capture a small percentage of the barbs he’s aimed towards his southern neighbour.

At this moment, we’re United in no way at all.

I’ll get back to Trump.

But, first, let’s get back to how the World Cup host is being picked. It used to be done by FIFA’s Executive Committee, but after the corruption scandals in the wake of the Russia ‘18 and Qatar ‘22 votes, the decision was made to overhaul the process. It is now one confederation, one vote.

The problem though, is that the awarding of a World Cup is based on continental interests (“it’s CONCACAF’s turn!” “It’s Asia’s turn!” “It’s Africa’s turn!”). Asia and Africa, simply because of the large number of nations on those continents, now hold the power. Instead of making things equal, FIFA made some continents more equal than others.

Africa has more than 50 votes, while, in contrast, South America has just 10 voting nations. So, politically, Africa has five times the power and influence as South America.

Basically, if we’d compare this to a Canadian political map, Africa and Asia are Ontario and Quebec. CONCACAF would be Alberta; filled with some wealthy nations, but without real political power.

So, as soon as Morocco was announced, you knew that it would get 50 or more votes out of Africa out of the 104 it needed globally. Sure, Liberia has pledged for United, Namibia might defect and South Africa — well, who knows which way South Africa will go — but we know Morocco will get the lion’s share of African support.

Add that to the Middle East (save Saudi Arabia, which has indicated it will support United), and the votes pile up for Morocco. The Organization for Islamic Cooperation, which cover much of the Middle East, recently endorsed Morocco 2026. Interesting that Guyana, a CONCACAF member, is part of that group. Dominica, Saint Lucia, and Antigua and Barbuda have, at least from their political leaders, endorsed Morocco. Remember that Antigua and Barbuda wasn’t happy about lack of hurricane relief from the U.S.

(FIFA says that politics should be separated from the bids when evaluating World Cups. We know that the opposite is true, and we should stop even trying to pretend about the “political interference” stuff.)

South America has endorsed United. But that’s just 10 votes. Big deal. Under the new voting system, South America means about as much as Prince Edward Island does in a Canadian election.

Morocco also has endorsements from Belgium, Luxembourg, Serbia, Russia and France. The quick zip across the Mediterranean is enticing for European TV networks and national associations. As well, outside of the Middle East, Myanmar is another Asian nation that has endorsed Morocco.

This is what Morocco has done so, so well — sell itself. Its technical merits (it got a 2.7 out 5 compared to 4 out of 5 from the FIFA technical committee) fall well short of United, but boy has it done a fabulous job of collecting endorsements from around the globe — from soccer stars to national associations. Morocco has shown support from countries not just in Africa, but around the world — including CONCACAF. And that put a ton of pressure on FIFA; how could it fail Morocco’s bid based on technical requirements, when so many key associations had already declared their support for a North African World Cup?

While Morocco has done things right, there are two things the United bid got horribly wrong.

First off, it’s been established that a bidder may create a list of “final” host cities, but the final decisions on what cities get what games ultimately lie with FIFA. So, there was absolutely no need at all for the United bid to declare its 60-10-10 split of games between the U.S., Mexico and Canada. But, they did. And, thanks to that, no one outside of CONCACAF sees this as a tripartite bid. It’s an American bid with a little help from their sort-of friends. So, when Donald Trump insults another nation or ruffles more feathers, the United bid can’t lean on the “but we’re Canada and Mexico, too” argument. That’s because they’ve put that split of games out there for everyone to see.

And, if United felt the deep need to announce the 60-10-10 split, it should have tried to get some marquee matches in Canada and Mexico. Maybe each would get a semifinal game. But the one-sidedness of the bid has made the word “United” a bit of a running joke. (At least Mexico City has been offered as a possibility for the opening game. But Canada gets nada in terms of marquee matches)

They had time to fix it, too. It could have been changed, because FIFA in the end has to rubber stamp where the games go — and that doesn’t come until after a bid has won. When the bid started to go south, all the three association had to do was get together and massage — or at least downplay — the 60-10-10.

Then, let’s touch on the idea to hand the bid over to-then U.S. Soccer President Sunil Gulati. After deciding not to run for the USSF presidency in the wake of the United States failing to qualify for World Cup ’18, Gulati remained at the head of the United bid. He was later removed, but was it too late? Remember, he had positioned himself as a sort of avenging angel during the great FIFA purge that saw Sepp Blatter  deposed from the president’s position. But Blatter was popular with a lot of smaller confederations. He was popular with Asian associations and African associations. While there’s no doubt that FIFA needed to have its house put in order, it was important that those who did the necessary dirty work get in and then get out. That would ensure there wouldn’t be any political hard feelings. Instead, Gulati was left out there at the head of the table, a lightning rod for bitterness. 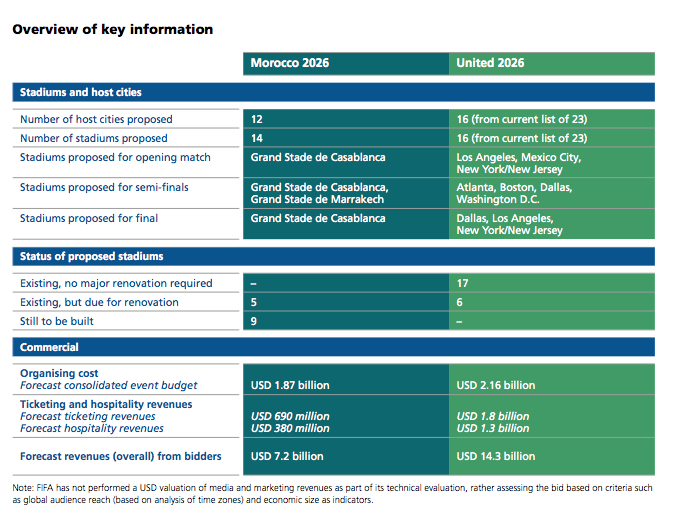 And that brings us to someone more unpopular globally than Gulati — and that’s Trump. Again, the 60-10-10 split gives the United bid nowhere to hide when Trump starts a trade war, talks about “shithole” nations or demands that America “win” every deal it makes. Then, he threatens countries who might vote for Morocco.

And he will be the American president on June 13, when the FIFA vote is held.

While the United bid book offers emphatic reminders that Trump won’t be president in 2026, the fact is, he’s here now. Americans elected him. And it’s right for anyone to worry who Americans might elect next.

So, with so many missteps, the United bid is now running from behind. Is there a way for United to still win this thing? Yes. But with each endorsement that Morocco receives, United’s success becomes all the more unlikely.