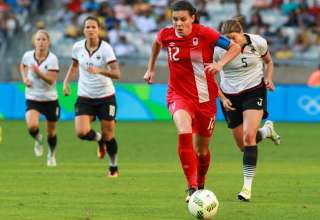 John Herdman took to Twitter Friday to let the world know about his displeasure.

“Gutted for Sinc. Back2Back podiums, 8 nominations, breaks the 2nd all time scoring record & scores the goal against BRA for bronze, nonsense,” he tweeted.

Why was Canada’s women’s national team coach so angry? Because Christine Sinclair, who moved into the No. 2 spot on the all-time women’s international scoring list in 2016, wasn’t on the shortlist for The Best FIFA Women’s Player Award. (Herdman was also skipped over in the coach-of-the-year selections).

German Melanie Behringer is another finalist; she enjoyed a great run with her gold-medal-winning side. She topped the Olympic tournament scoring chart, with five.

And Carli Lloyd was the final name on the shortlist. She scored 17 goals for the American national team through the year. But, and this is a big one, only two of those 17 goals came in the Olympic tournament. And she didn’t score in 120 minutes of play against Sweden in the game that saw the Americans’ medal hopes dashed (to be fair, Lloyd did convert her effort in the shootout).

But, I don’t blame the voters for not selecting Sinclair or Herdman, despite their achievement over the past year. Despite the successes of the Canadian national team, compared to other nations at the top of the women’s soccer ladder, we don’t do enough to showcase our top players. When Canada plays a home game — as it will against Mexico in February, their first home date since last summer’s Olympics — it’s an event, because they come around so infrequently. The Canadian schedule isn’t loaded and, when we do play outside of major tournaments, there are still many games at neutral sites where there is little or no buzz.

Meanwhile, even in a down year, the Americans are always at the forefront of global women’s soccer – because their team is continually put in the spotlight.

In 2016, the Americans played 16 friendlies, and hosted the CONCACAF Olympic qualifying tournament, that put another five games in Texas on that slate. The US women’s national team fattened up their players’ stats with many creampuff contests; the Americans truly tested themselves with two home wins over Romania by an aggregate 13-1 score; they eked out a 9-0 win over Thailand. They played Colombia twice, winning by an aggregate 10-0 score.

What the Americans don’t do very much is a) play friendlies on the road b) risk embarrassing themselves at home. So, over and over, we see American players rocket up the international scoring charts; how could they not? Where do you think Sinclair’s goal total would be at if the Canadian Soccer Association had booked a bunch of friendlies at BC Place against the likes of Thailand or the teams near the bottom of the European rankings?

This isn’t meant to blast the American program. The women’s national team in the United States plays a heavy home schedule and there are a lot of financial incentives for them to do so. They have been a leader in getting women’s soccer recognized globally, and they deserve nothing but applause for doing that.

Now, the players and the U.S. federation are squabbling over how much the women’s players get paid. The American players have taken their grievances to the Equal Employment Opportunity Commission. Their battles tell us this: The American program needs dollars from ticket sales and sponsors and merchandise that a lot of home friendlies can generate. And with that many spots on the dance card to fill, you’re not always going to get France or Germany or Japan (or even us Canadians). Sometimes you entertain the crowd with a great feeding-to-the-lions game like Thailand-USA.

Now, to the Germans; they played four friendlies at home, including an 11-0 romp over Ghana, and three on American soil (all of those were competitive, a loss to the Americans and narrow victories over France and England). But the Germans were the Olympic gold medalists and, save for an Olympic group-stage loss to Canada, put their winning credentials on display. And Behringer led the tournament in scoring, so very little argument with her appearance on the list.

Marta, had two goals and an assist at the Olympics (Sinclair was 3-1), but it was the Canadian who left Brazil with a medal around her neck. Brazil hosted four friendlies so far in 2016, with three more still to go. But it needs to be noted that Brazil, despite being at home, went three straight games at the Olympics without scoring a goal in regulation or extra time, against South Africa, Australia and Sweden. To be a world player of the year, the elite player has to rise in the biggest games. Frankly, Marta didn’t do it.

So, if you’d argue that Sinclair’s inclusion on the 2016 shortlist would amount to something like a lifetime achievement award, you’d also need to accept that it’s also the case for Marta.

But in the end, if we don’t do better to put our own players in our national spotlight, the rest of the world isn’t going to bother putting Canadian players in their spotlight. We simply don’t have the presence of other top-ranked women’s teams, even though we hosted the Women’s World Cup in 2015. Once that was done, we have returned to a pattern of infrequent women’s national team showcase home games.