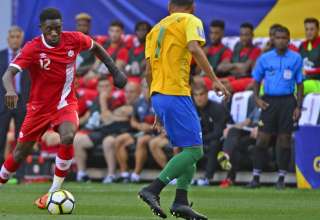 Alphonso Davies has been named the Canadian men’s player of the year.

Davies, who is now with Bayern Munich after a record transfer from the Vancouver Whitecaps, registered four assists for Canada in the calendar year. That’s the second most by a Canadian player since the record keepers started counting assists.

(For the record, we’ve been counting assists as a legitimate statistical thing since 2000.)

For the record, The 11 had Jonathan David on our ballot, behind Davies.

Davies had a 95 per cent passing success rate in the CONCACAF Nations League.

“He has been a standout performer for club and country and that is just a consistent reality now for Alphonso Davies,” said men’s national-team coach John Herdman in a release issued by Canada Soccer. “For club, he picked up many an accolade, culminating with what looks like one of the biggest signings out country has ever seen.

“For Canada, every time he has been asked to take a responsibility and support the team, even playing out of position, he has shown his character. He is just a humble guy who loves the game and will do whatever it takes to be successful.