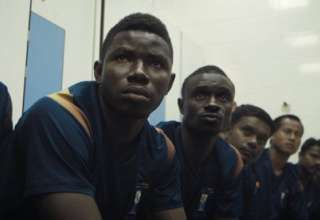 Sponsored by the Alberta Labour History Institute, this documentary will be screened at Metro Cinema at May 7 at 7 p.m. MT, as part of the Northwestfest — a festival that celebrates documentary filmmaking. Directed by Adam Sobel, the film looks at the workers who are building the venues for the 2022 World Cup in Qatar.

That World Cup has come under close scrutiny due to allegations of FIFA vote-fixing and, even more troubling, reports of inhumane working conditions for those building these new superstadiums in the desert. More than a million people are working to ready Qatar for the World Cup, and The Workers Cup looks at an initiative that saw 24 construction companies each asked to field teams for a special tournament.  For more on the film, see the trailer at the bottom of the post.

The 11 is happy to be able to offer two passes to the film for a lucky reader. Click on the link below, then wait for the page to reload, then click the green button to enter.

The 11 does not share information about our readers to third parties. Nor do we sell advertising lists.

The Workers Cup – Trailer from Mediadante on Vimeo.

Tickets for THE WORKERS CUP