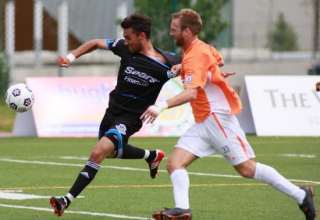 Both Saiko and Paul Hamilton, who both earned NASL Best XI nods during their time with FC Edmonton, will put on Eddies jerseys once again for Sunday’s Al Classico exhibition match. Calgary Foothills and the FCE Academy will face each other, and more than 3,000 free tickets have been snapped up. As well, Allan Zebie — who is one of the stars of the new Canadian Premier League manifesto video that was released by the league on Friday — and former Eddie Edem Mortotsi will also make returns for the Eddies.

But, in the cases of Hamilton and Saiko, coming back to play for FCE means something very special as the Eddies push to make a return in 2019 in the Canadian Premier League. Issues over Clarke Field still need to be ironed out — but the hope is that Sunday’s friendly will simply be the first chapter in a long-standing CanPL rivalry between Calgary and Edmonton.

Saiko is No. 2 all-time in the FCE goals list, and scored about as spectacular a first-franchise-goal-in-history a person could score — a screamer in Fort Lauderdale that helped set up an FC Edmonton comeback win.

When Colin Miller took over as FC Edmonton coach in late 2012, though, he made the call to not offer Hamilton a contract, but the defender — who had made Edmonton his home — stayed on as a trialist before moving onto Carolina. Then, later in 2013, Miller made the decision to no longer allow Saiko to train with the first team, a move which led to a supporters’ protest.

Because both players had storied FCE careers but rather unceremonious exits, the fact that they can suit up again for the Eddies — even if it feels kinda like a testimonial — is important. As the Eddies go forward and try to re-establish themselves as a CanPL side, it’s vital that the team repair a couple of bridges, and celebrate players who were key parts of the team’s history.

Saiko and Hamilton are in different phases of their lives than when they were young Canadians looking to prove themselves as pros. They now have families. They have responsibilities. So, don’t look at Sunday as the first part of a comeback story.

“(Coach Jeff Paulus) called and asked me if I wanted to play, and I said ‘sure,’” said Saiko. “For me, it’s just a runaround right now. My family, my kids will be there and it’s a chance for them to see me in an FC Edmonton uniform.”

While Saiko’s exit from FCE wasn’t steeped in glory, he said that he has “way more positive memories than negative ones” from his time with the Eddies.

And, he says that it’s important to support YEG4CPL cause, as he thinks it’s so important for Edmonton to have a team in the CanPL.

“For the kids, it is so important to have a team to support. When I was a kid, I wanted to see an Edmonton team play. I supported the Drillers for sure. It was big.”

Maybe Saiko will hit one of his famous 25-yard screamers that became parts of FCE lore. Maybe a boomer like that goal in Fort Lauderdale, or that outside-of-the-foot bender that made Puerto Rico’s play-by-play man scream “Saaayyyyyyy-kooooooooh.” Or maybe a confounding curler like that time he bagged a hat trick against Carolina.

“Maybe I didn’t score a lot of goals in my time with FC Edmonton,” Saiko laughed. “But maybe I made up for the lack of quantity with the quality of the goals.”