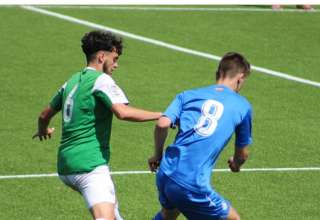 Canadian teenager Matis Romero will be cheering for the Portland Timbers in this Saturday’s MLS Cup game.

That’s because, if all goes well with a trial that’s set for January, Romero — who turns 18 in February — could become a member of the Timbers organization.

Romero, a holding mid who played in Spain after coming up through the Montreal Impact’s youth system, has already worked out for the Columbus Crew, Toronto FC, the Seattle Sounders and the Vancouver Whitecaps.

Agent Peter Raco is helping Romero at the moment, but the teen has worked through most of his career without an agent.

“I’m doing it all by myself, I’m always doing everything by myself, sending out my C/V, finding phone numbers of coaches, finding coaches’ e-mails,” said Romero.

Case in point: Go back to when he was just 12. He was with the Impact’s youth system. He had played in Europe at a youth tournament a couple of years before, and knew that’s where he wanted to go. So, he started e-mailing coaches in Spain. And, he got a bite from Malaga. He didn’t even tell his parents that he was soliciting other clubs.

“It wasn’t easy. It’s hard for a player without an agent to get a trial at a good club,” said Romero. “I knew if I wanted to get there, I had to step up levels at a young age.”

When the academy director at Malaga asked him if he also had an EU passport, Romero knew things were serious. So, the family paid his way for him to go to Spain and trial, and impressed enough that he earned a second audition, this time paid for by the club. He scored in a game against Getafe and, a month later, he was brought into the youth program.

“There were players there who were ready to kill someone to get to the first division,” he said.

But, things soured in the second year.

“I made a bad decision,” Romero recalled. He said the coach told him he wasn’t going to play because of some less-than-expected training performances. But Romero was a kid and didn’t know how to handle the criticism. He decided to leave.

“I was immature, that was it… I really regret what I did,” he said.

After he returned to Montreal, an agent reached out and told him there was an opportunity at CD Leganes. He returned to Spain and played in Leganes’s youth system. But while things were going well on the field, Romero says it wasn’t easy off the field. He went through several different apartments. He says one place was a party pad, making it hard to get rest. Romero claimed that another apartment had crack, and not the kind you find in walls.

Unhappy, he fired the agent, going back to his normal routine of running without one. Romero said that soon after he terminated the deal with the agent, the club contacted him and told him he wouldn’t be in its plans going forward.

But Serge Dinkota, who coached the Impact’s U13 program when Romero was there, is now with the Timbers organization. That link helped earn a trial with the current Western Conference Champions.

And, maybe, just maybe, a chance at stability for a well-traveled young Canadian.