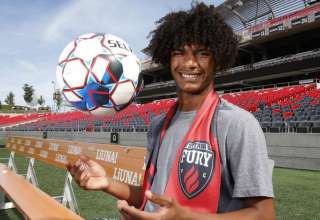 The Ottawa Fury needed this.

First, let me get a disclaimer out of the way: What I am about to write in this column is not meant to question the footballing merit of the signing of 18-year-old local product Jadon Vilfort. The defender spent most of 2018 training with the Fury, and appeared in Ottawa red and black in a friendly against the Montreal Impact. He has been on the USL club’s radar for a while, and the mutual interest between team and player was sparked long before the Fury announced its intention to not join the Canadian Premier League and remain in the USL, instead.

His signing, announced Thursday, brings the number of Canadians on the roster to eight.

“Him being a local talent and getting a chance to play for his hometown pro club is not only a great moment in his development and career, but he could really become an inspiring story for kids all across the Ottawa-Gatineau region hoping to make it,” said Fury general manager Julian de Guzman in a release issued by the club.

But, as many message boards continue with USL vs. CanPL snipes, from a PR perspective, the Fury needed a hometown-prospect signing more than the club needed to secure a flashy, proven goalscorer. Over the last few weeks, Canadian soccer Twitter has been filled with stories and updates about seven Canadian Premier League teams all adding young, Canadian players to their roster. In the case of all of the teams save Halifax, those include significant signings of local players. Heck, right now, FC Edmonton only has one announced player who isn’t from the city.

So, the Fury, though it led all independent USL or MLS teams in terms of minutes played by Canadians in 2018, needs to sing its own praises, too. The club needs to be even louder when it comes to broadcasting the idea that, yes, you can develop local players in a USL environment, as well.

Even though the Fury have had local-hero stories in the past (Eddie Edward, Jamar Dixon, to name a couple) it needs a new one. It needs another chapter to add to its book of Canadian successes. When you’re looking to win over hearts and minds, remember that sports fans can have awfully short memories. And, after the CanPL/USL debate, it’s easy for many to forget that, well, the Fury — whether it be in NASL or USL — has always put a premium on finding and developing Canadian talent.