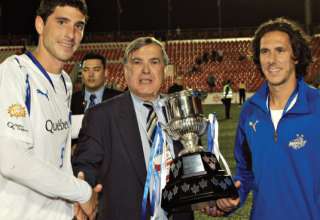 When you’re the coach of a struggling soccer club that has gone winless at home in its past four matches, picked up only four of 15 possible points in MLS competition and bowed out of the Canadian Championship in the past 30 days, your first impulse would probably be to let the call go to voice mail.

Frank Klopas had just returned home from yet another road loss, this one the 2-1 decision his side dropped to Toronto FC on Aug. 29. He answered when team Vice- President of Technical Development Nick De Santis rang, and was informed that he had been relieved of his head coaching job with the Montreal Impact.

While the timing was unusual, the move itself did not come as a great surprise. The team had been playing aimless football and getting spotty results since its CONCACAF Champions League run early in the season. Fans were expressing their dissatisfaction with Klopas’s dedication to a 4-2-3-1 configuration, putting his name on banners that expressed feelings of a type generally associated with their favourite whipping boy, De Santis.

Also in the mix was a recent emphatic social-media outburst by team captain Patrice Bernier’s wife that excoriated the Impact about his lack of playing time and widespread fan rumblings that perhaps it was time for a change of direction.

And, 43-year-old Mauro Biello was announced as interim head coach the next day.

An assistant with the Impact since 2009, Biello is fondly remembered as one of the greatest players to suit up for the team.

A forward who spent all but one of his outdoor campaigns playing in Montreal colours, winning the US Open Cup with the Rochester Raging Rhinos the one year he played away from his home town, Biello retired as the Impact’s all-time scoring leader and is the only player to appear in 300 games with the club.

Biello has held the reins in the past, filling in for ex-Impact-head coaches Klopas and Marco Schällibaum when they were obliged to temporarily step away from their duties by MLS disciplinary actions. He was also entrusted with the team for its post-season trip to Italy in 2012, which took place shortly after its initial MLS head coach, Jesse Marsch, parted ways with the club.

After watching five other head coaches come and go since joining the technical staff, Biello fully realizes that all gaffers are temporary but intends to do what he can over the final stretch of the season to remove the word “interim” from his job title.

“I’ve got a chance to push this team, to bring it up a notch, and I’m going to take it. I’m going to focus on that to do my best and help this team,” he said at his coming-out presser. “We’ll see what happens at the end of the season but I know that I’m going to give everything to this team.

“I’ve been here for more than 20 years,” he continued. “I’ve got that, so I have to pass it on to my players. I have to make them understand that it hurts when you lose. I want that within my group. I want a team that will fight, that will apply the things that the coach and the technical staff give them. It’s about passion and pride.”

Asked how he would modify team operations, Biello replied that it was only natural that his tasks were going to be different as would be his methods of communication with his players.

“I’m not an assistant coach who is there to support a head coach any longer, I’m the head coach and I have to take the decisions,” he said.

“I want a team that’s able to build and to react and adapt to changing game situations. A match is made up of moments and you have to be ready, apply the principles of both our offensive and defensive organization — principles that we work every day to build our identity. We’ve already seen some good things, in CONCACAF Champions League but also more recently.”

Asked for their reactions to the new coaching regime after their first workout under the new regime, players of several years’ standing expressed optimism and support for their recently installed leader.

“As you could see we played a lot today and it that’s always enjoyable for the players,” said defender Wandrille Lefevre. “We started practising more intensively under Frank, but today was very intense. We’ve finished training and I’m drained. But it feels good and it helps us develop our competitiveness.”

“It’s a bit of a fresh start for everybody,” offered goalkeeper, Evan Bush, who went on to say that he felt a somewhat renewed spirit about the club. “I’d be ready to leave my life on the pitch for him and I think a lot of other players also have a lot of respect for him,” said defender Hassoun Camara. “Personally, I know he’s the right person to help the team make it into the playoffs and I’m 100 per cent confident we’re going to make it.”

Biello’s head coaching career got off to a good start with the Impact picking up as many MLS points in his first four games (2-0-2) at the helm as the club did over the entire month of August.

On the fifth of the month, Montreal defeated a visiting Chicago Fire side in a match that saw the Impact take an early lead, lose it, and come back to triumph 4-3, largely on the strength of a Didier Drogba hat trick.

On the 12th , with its stellar central defender Laurent Ciman sitting out a suspension, the Impact played the L.A. Galaxy to a scoreless draw to open a two-game road trip. Biello also daringly decided to start his depth players for a midweek game in San Jose so his squad would be ready for a key weekend match at home to New England. The team got a draw in northern California then routed the Revolution at home. The gamble paid off.

The head coaching job with the Montreal Impact belongs to Biello for now. Given the regularity with which the title has passedfrom one man to another in recent years, it may not be his to hold, but two decades inside the organization might be enough to give him a shot at mastering the internal politics and external pressuresinvolved in guiding the club over a longer term than most of his predecessors enjoyed.