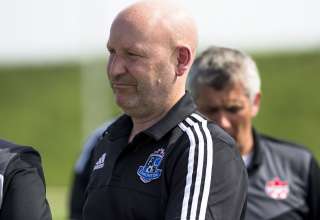 And, Jeff Paulus, who runs FC Edmonton’s academy, could use that as his theme song, as well. From 2012-17, on top of his duties developing the team’s young charges, he was the first team’s assistant coach. When the Eddies announced at the completion of 2017 that they were done with the NASL, the staff was whittled down. Basically, there’s general manager Jay Ball and Paulus.

The academy is still a going concern in 2018, and many of Paulus’s young players took part in Sunday’s “Al Classico” friendly against Calgary Foothills of the PDL.

It’s no secret that FC Edmonton is targeted as a potential charter member of the Canadian Premier League that is set to kick off in 2019. But, a stadium deal still needs to be forged with the City of Edmonton for Clarke Stadium. Seating needs to be expanded to 7,000 and FCE needs to be the primary soccer tenant, as per league guidelines. The team needs to be able to control more of the concession revenue. Owners Tom and Dave Fath want to see more memberships sold and more corporate support.

Stuck in the middle with you, indeed.

“For me, I’ve got the benefit of still running the academy,” Paulus said after Sunday’s Al Classico. “I still get to put my principles of play into that program, I get to have my kids play the way I want them to play. So, for me I go forward with the mentality that I at least I am still the academy coach at the moment and the director.”

He’s getting set for a full academy season, and there will be guests, as well. Former FCE senior-team players Allan Zebie and Edem Mortotsi are working out with the kids. So, Paulus does have a base to work from.

“If we get the CPL in Edmonton, and I’m fortunate enough to get the job, then I’ve had the academy since January 2012… There are players I know so well, there are players who contact me all the time. So what I am able to do at the moment is offer them training at our academy. There’s no promises of first-team football. But Allan Zebie trains with us every day. Edem Mortotsi trains with us when he’s not working. If there is a CPL, then maybe we can emulate what Foothills gets to do, which is prepare a team ahead of time.”

He said that he knows both FCE and Foothills will “leave no stone left unturned” when it comes to scouring Alberta for talent. And, Paulus said the new Canadian league will offer opportunities to Canadians who have both played for FCE and its academy grads. Paulus brought back some veterans for Al Classico. Some were there to get a nice hand from the fans, others were there to prove a point.

“I’d be lying if I said that was just an exhibition game for us,” said Paulus. “I don’t know what’s going to happen in the future, but I certainly want to showcase players like Edem Mortotsi and Ajay Khabra who have come through our academy who I know so well, who know me so well. Again, I don’t know what the future holds, but the Canadian Premier League has a place [for players like those]. There’s a place for our ex-FC Edmonton Academy players.”

Now, if only the international agents would stop calling and sending videos of their players. Paulus is still being deluged by agents looking to get their clients into the NASL, even though FCE pulled out of that league last year — and the NASL isn’t, well, playing right now.

“It’s still a frustration,” says Paulus. I am still getting videos today about players I should be signing. And I write back: Can you please check the latest NASL standings? I don’t mind some of these agents, but if you’re going to be an agent, then do your job and at least know that we don’t have a team.”