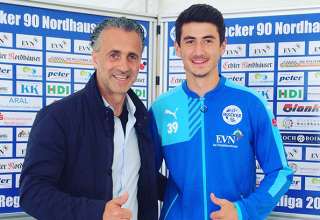 In terms of wins and losses, there is no doubt that FC Edmonton has entered uncharted territory; the club is at the top of the NASL fall standings, losing just one of their first eight matches.

But, maybe just as vital, is news that the team’s academy has sent a prospect to Europe — in an above-board, honest-to-goodness, play-by-the-rules transaction between two clubs.

The Eddies confirmed that a deal has been consummated between the clubs, but won’t release the terms.

Halilic grew up in Edmonton, but was born in Germany. He is currently 18 years of age.

“FC Edmonton gave me a chance to step up my game and training when we didn’t really have something like that before in Edmonton,” Halilic said in a release issued by the club. “FC Edmonton helped me realize that it’s more than just training and games, it’s about mentality and preparing for those training sessions and games…Personally I would also like to thank [Academy Technical Director] Jeff Paulus, because the three years I’ve been at the Academy, Jeff has always pushed me to be better and has always had faith in me as a player.”

For a lower-division club to survive, it needs more than bums in seats and sponsor deals. It needs to get some kind of compensation for players it develops. So, for FCE to be able to show that it’s made a transaction with a German pro club — albeit one in a lower division — it ends up being a selling point in attracting young players to the academy. It piques the interest of other clubs.

Of course, when Swedish third-tier side Landskrona BoIS announced last month that it had signed former FCE midfielder Hanson Boakai, the issue of compensation was front and centre. Boakai has played in non-league games for the Swedish side; league play is set to resume August 21. FC Edmonton coach Colin Miller has said that the club’s stance is that if Boakai is signed by a European pro team, that FCE would be owed training compensation as specified by FIFA rules. The Eddies will not comment further on the Boakai situation.

It is worth noting that a sponsor is paying Boakai’s contract.