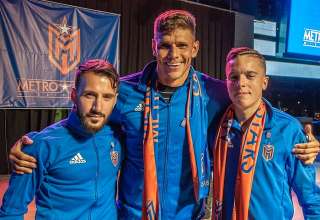 Adrian Cann has been known as many things in a storied outdoor soccer career, but “goal scorer” is not one of them.

In 4,074 career MLS minutes played with the Colorado Rapids and Toronto FC, the Canadian centre back had no goals and a total of 10 shots on target. In two seasons with the NASL’s San Antonio Scorpions, he scored twice.

But, as a member of the expansion Mississauga MetroStars of the Major Arena Soccer League, Cann knows he’ll be asked to move up in the play, as defenders always do in the turf-and-boards game. He’s going to get to shoot a lot more. And, well, maybe, just maybe, some goals will come.

“The prospect of playing in an area that’s more confined, I like that,” said Cann. “It gives me the ability to move up and be an offensive threat and take shots as well. Throughout most of my career, I’ve been hidden in the back four. I’ve been organizing the back line. So many times, I had the urge to move up in the play, but couldn’t do it.”

So, yes, the chance to be a little more offensive-minded is one of the things that attracted Cann to the MetroStars, where he’ll join former TFC teammate Dwayne De Rosario and Anthony Osorio, formerly of TFCII and brother of Reds star Jonathan Osorio. The expansion side is team no.17 in the MASL, which has teams in the United States and Mexico – and the rosters are chock full of familiar names to those who followed the NASL or know the ins and outs of USL rosters.

Cann has played for the Canadian national arena team, which has recently played friendlies against Mexico and the United States. On that side, he’s teamed with indoor-soccer stalwarts like goalkeeper Josh Lemos and forward Ian Bennett. They’re with the Milwaukee Wave, one of the most-recognized teams in indoor soccer, a club that’s joined and outlived more leagues than you’d want to count. Giuliano Oliviero coaches both the Wave and the Canadian national side. Expect the Wave (the unofficial “Team Canada” of MASL before the expansion to Mississauga) and the MetroStars to fire up a great rivalry right off the bat. The MetroStars first-ever regular-season home game will see the Wave visit the Paramount Fine Foods Centre.

But why does Cann keep going?

“I still have the energy and motivation to compete, he says.  “If I’m out, I’m playing pick-up somewhere.”

He’s played a little in the unsanctioned Canadian Soccer League over the past couple of years. “It’s a little of this and a little of that,” he says of the independent league that, before it was de-sanctioned, had allegations of match-fixing levelled against it in European courtrooms. “Some of the games are very competitive and some of the games are not so competitive. It’s hit or miss.”

Would he go back to the CSL? He’s not sure — because he’s curious about the new Canadian Premier League. Cann is 38, but he feels he could he still has the energy to play outdoors, professionally. And, if he got a call from a CanPL team, he wouldn’t hang up.

“It’ s hard to separate myself from something I enjoy. Soccer is me. Absolutely, I’d put the boots back on and be ready for battle. I like getting knocked on my ass and I like knocking other people on their asses.”

The return of arena soccer

But the arena game isn’t dead. And Peter Kovacs, the president and general manager of the …