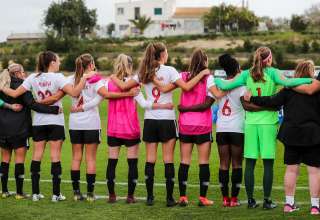 Those games will go in Canada’s favour if, and this is  the big if, the Canadians convert that one golden chance when it comes. And that means a team has to have a clinical mindset.

So far in 2019, we’re waiting to see signs of that killer instinct. After Friday’s 1-0 win over Scotland, Canada is two games into the Algarve Cup — and, while a draw with Iceland and a narrow win over the Scots isn’t a bad haul by any means, the cold truth is Canada has one goal in the two games. And that goal, Christine Sinclair’s 179th in international competition, came on a penalty.

So, nothing out of open play.

And, just like the Iceland game, it’s not like Canada didn’t have chances. Jordyn Huitema put a shot at close range right at the keeper. Sinclair was put clear onto the Scottish goal thanks to a wonderful, defence-splitting pass from Ashley Lawrence, but didn’t even hit the net.

It’s not like Canada needs to kill its opposition for the sake of killing the opposition; but what the team has to do is start showing some finish in front of goal. Right now, the Canadians have one win, one draw at the Algarve Cup because, really, their goal hasn’t been threatened. That’s not going to happen at the World Cup. At some point, the opposition will score. At some point, Canada’s women might need to score two to win, or to find the net on that one great chance that comes to them in order to turn a 0-o draw into a 1-0 triumph.

You’re not going to get games in the World Cup where you get 10 great chances in order to score one. The old cliches like “we’re not scoring, but at least we’re creating the chances” don’t work here. With the likes of Sinclair and Huitema and Janine Beckie at the top of the attack, Canada is more dynamic now than it was at the 2015 Women’s World Cup. Now, it’s time for the talent to start paying off.