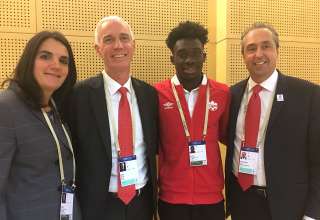 “When I was five years old, a country called Canada welcomed us in, and the boys on the football team made me feel at home. Today, I’m 17 years old and I play for the men’s national team and I’m a proud Canadian citizen. And my dream is to someday compete in the World Cup, maybe even in my hometown of Edmonton.” — Alphonso Davies

The World Cup will be played on Canadian soil in 2026.

The United bid from the United States, Mexico and Canada ended up winning the World Cup-hosting vote comfortably on Wednesday. Edmonton, Montreal and Toronto are the three proposed Canadian host cities out of the 23 in the bid. The bid called for 10 of the 80 games to be played on Canadian soil, but FIFA has the final call when it comes to how many games will be played in each of the three host nations.

Of the 23 proposed host cities, 16 will be selected. So, fans in the prospective host cities still have to sweat out one more selection process.

“All of the (Canadian) host cities are really excited to be part of the process,” said Canada Soccer President Steven Reed. But he admitted that there “may be some disappointment” for some when the final 16 are announced.

“Why is this certainty so important?” said Reed. “It means we can focus more on other areas, like delivering an unrivalled experience for players and fans, from the moment they arrive to the final whistle.”

Canada Soccer had originally planned to bid for a 32-team World Cup on its own. But, after FIFA changed the scale of the tournament to include 48 teams, which meant more stadiums and more infrastructure, the decision was made from the Canada, Mexico and the United States to combine their efforts.

“No one country — even my own — could have done it themselves,” said Cordeiro.

As well, teenage Canadian national-teamer Alphonso Davies appeared in front of the conference, and talked about the thrill of possibly playing in his hometown of Edmonton.

In the end, it wasn’t close. Morocco go only 65 of the 201 votes at the FIFA Conference in Russia. A bid that has been predicted to be running neck-and-neck with the United bid, well, didn’t.

And, while the African vote was fractured, the CONCACAF votes weren’t. Four CONCACAF nations whose government had previously expressed support for the Moroccan bid all ended up putting an X by United on their ballots: Those four were Antigua and Barbuda, St. Kitts and Nevis, Dominica and Saint Lucia.

Iran voted that neither bid was sufficient and that the voting process should be reopened.

“This a milestone moment for soccer in this country,” said Canadian Premier League Commissioner David Clanachan in a statement. “Having the 2026 FIFA World Cup in Canada will transform the way that Canadians perceive the global game and change the way the world sees Canada. Congratulations to the United Bid on their commitment and special recognition to our partners at Canada Soccer for their leadership in making Canada a focal point of the bid.

“The Canadian Premier League and our clubs will be celebrating this decision with all Canadians coast to coast. We look forward to having the 2026 FIFA World Cup played in Canadian stadiums, and we are even more excited at the possibility of having CPL athletes playing on the world’s biggest stage on home soil. “

Teams will be divided into 16 groups of three, into regional clusters, to help limit travel. The top two teams in each of the groups will qualify for the 32-team knockout round. Canada is expected to host seven group-stage matches, two round of 32 matches and a single round of 16 game.

The bid is expected to generate $14 billion in revenue, sell 5.8 million tickets and generate $5 billion in economic impact for the three countries.

American President Donald Trump relieved some of the political tensions that had built up in regards to the bid — heck, Canada and the Americans are in the first stages of a trade war right now — by writing letters to FIFA assuring that. for the World Cup, visiting fans from around the world wouldn’t be hindered by travel bans.

The United bid also survived the high-profile exits of Vancouver, Chicago and Phoenix. In Vancouver’s case, the British Columbia government refused to support a stadium agreement with what it felt were open-ended financial guarantees that put the province at undue financial risk.

The vote had been predicted to be close, and Morocco looked to have momentum until FIFA released its scores on the technical merits of the two bids. The United bid scored far higher than the Moroccan bid. Still, we couldn’t shake the feeling that politics would render the results of the technical assessments moot. In the end, they didn’t.

Cordeiro said the bid’s strategy was to consolidate the Americas first, and he noted that the bid got 100 per cent support from the voting CONCACAF members and 90 per cent out of South America. Then, the focus was on Asia, where CONCACAF ended up outpacing Morocco by roughly a three to one margin.

“I would say about 10 days ago we had a sense that this was breaking our way,” said Cordeiro. “To say that we knew it would be a landslide is probably unfair, but we knew it was going to go well for us. So we were very pleased, at the end, with the result and delighted it was quite the result it was.”

And what will it mean for Canada?

“We could become the preeminent sport in our country,” said Reed. “That’s what we’d like to see.”