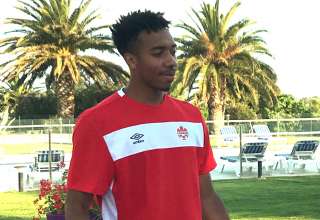 A couple of players brought up through the Vancouver Whitecaps system combined to give Canada the opening goal in a 1-1 draw with Japan in their final group-stage game of the Toulon Tournament in France.

Theo Bair provided the left-footed finish from a Noah Verhoeven pass to give Canada the lead just nine minutes into the match. Verhoeven scored the winner over Turkey earlier this week.

Verhoeven’s pass caught Bair in mid-stride. The Canadian forward was able to cut between two Japanese defenders and then clip the ball against the grain as the keeper came out to challenge him. It was a composed finish that might make you think about his soccer idol, Thierry Henry.

But, even though Canada went through Group C place undefeated, it will not proceed to the tournament semifinals. Turkey’s win over Portugal Sunday pushed Canada to second place. Turkey finished the group stage with six points (two wins, one loss) while Canada finished with five points (a win and two draws).

Twelve U-23 teams are divided into three groups of four at the tournament. The group winners all get spots in the semifinals, while the best of the three second-place teams also gets a spot. England got second spot in Group A with seven points and had already clinched that wild-card spot in the semis.

Canada, instead, will play France in the fifth-place game.

A goal from Japanese sub Kaoru Mitoma represented the first time Canada’s defence had been breached in the tournament. But, it would be enough to prevent Canada from making it to the final four.