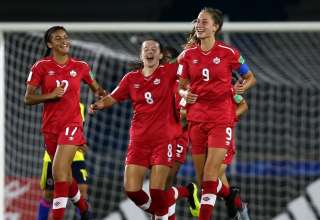 I finally had the chance to watch Canada’s opener at the U-17 Women’s World Cup on PVR. I knew that Canada beat Colombia by a 3-0 count in Uruguay before I hit the play button.

So, my evening went kinda like this: By halftime, I was wondering, “really, Canada won this game 3-0?”

Then, it got even more interesting, as Canadian defender Maya Antoine gave the ball away deep in her own half. With two Colombian players rushing towards the Canadian goal thanks to the turnover, Antoine compounded the mistake by bringing down Gisela Robledo from behind. Penalty to Colombia.

So, I watched keeper Anna Karpenko stop Maireth Perez’s penalty, then the rebound, too. To be fair, Perez didn’t hit the world’s best penalty, pushing it up the middle with not a lot on it.

With 20 minutes left to go, it was still 0-0, and then Caitlin Shaw was brought down by a clumsy challenge from Colombia’s Andrea Perez, who was already on a yellow. Perez did what many players who are on yellows do when they make rash challenges; she rolled around like she got the worst of  it, trying to sell the referee on the idea that the infraction was a lot closer to a 50-50 challenge than maybe it first seemed. Well, she saw a second yellow, anyway.

Still, in the 72md minute, Karpenko leaped to tip Maria Reyes’s free kick off the bar. Colombia was inches away from taking the lead. And I thought: “Really, Canada won this game 3-0?”

Finally, Canada got the breakthrough when Jordyn Huitema was left wide open to nod in a corner kick. But, Colombia, despite being down a player, roared back, and Kelly Caceido walloped a free kick that had Karpenko beat, but crashed off the bar.

So, Colombia fluffed a penalty kick, and hit the woodwork twice. And I thought: “Really, Canada won this game 3-0?”

I finally got to the two late goals that sealed it for Canada. The first: Andersen Williams had a tap-in after Colombian defender Laura Marcelo made a hash of a goal-line clearance. Marcelo did keep the initial attempt from going across the line, we can give her that, but she got absolutely no distance on the clearing attempt.

The second: Jessica De Filippo finished it off with a goal deep into stoppage time, as she brought down a cross and beat two defenders with a deft turn before smartly placing the ball in the corner of the goal.

In the end, this was a scoreline that flattered Canada. You wonder what would have happened had Colombia converted the penalty and gone ahead. The Colombians hit the woodwork on set pieces. If this one would have finished 3-3, you couldn’t have complained that it was an unfair result.