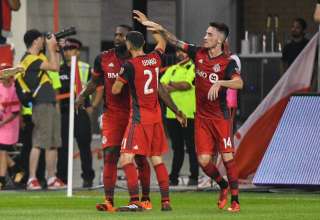 Well, for the Whitecaps, at least the air in Toronto isn’t filled with thick forest-fire smoke.

That’s about it when it comes to any sort of a silver lining for the Vancouver Whitecaps. After being absolutely blown out in the second leg of the Canadian Championship final, it’s clear that this club needs to do some serious soul-searching. After Wednesday’s 5-2 loss — a result of Toronto’s unstoppable force meeting the very moveable object that was the Whitecaps’ backline — supporters back in B.C. are already creating their wish lists to be filled by the Alphonso Davies transfer dough. New defenders? Check. New coach? Definitely — the grumbles have turned into rumbles.

It just wasn’t that the Whitecaps gave up five. Jozy Altidore was rampant, scoring a hat trick. The Reds were as sharp offensively as they’ve been all season. But, wow, were the Whitecaps bad. Awful. Insipid.

Maybe it was the fact that Doneil Henry went on wander after wander to the point where his centre back position was merely a suggestion. Or that fullback Marcel De Jong allowed Jay Chapman to fire a cross through his legs, and no one bothered to mark Altidore, giving him an easy tap-in.

Heck, Davies got the mercy hook in the 50th minute, as coach Carl Robinson decided enough was enough for the team’s teenage star.

A breakaway goal from Kei Kamara and a tap-in from Brek Shea after Erik Hurtado dashed around TFC fullback Ashtone Morgan and put the ball in front of goal, well those two goals were the proverbial lipstick on the pig. They shouldn’t be allowed to mitigate what was a shockingly indifferent performance in a Cup final. It was if the Whitecaps hadn’t emotionally recovered from Henry’s late own goal that tied the first leg 2-2.

Through the first half, the Whitecaps were surviving. Sure, they didn’t create much going forward, but the score was still at 2-2 on aggregate. But, by halftime, it was all but over.

First off, TFC’s Justin Morrow played a clever ball to Marky Delgado in the box, and he quickly backheeled the ball into the path of Altidore, who had caught Henry napping. With time and space, Altidore smacked the ball into the net inside the near post.

Henry then lost the ball to Delgado in midfield, then chased the ball out onto the wing as it was played out eventual tournament MVP Jonathan Osorio. Henry left his position behind, then, to compound the issue, couldn’t stop the cross from coming in, which Sebastian Giovinco headed in to become the all-time leading scorer in the history of the Canadian Championship — since it adopted the tournament format, that is.

The second half began with Whitecaps goalie Stefan Marinovic sprawling to stop an effort from Chapman. But, just seconds later, Chapman was able to punch a low cross through De Jong’s legs that Altidore met for his second goal.

It was 4-0 after the Whitecaps decided not to mark Altidore on a corner, right after Marinovic had made a leaping save to deny Giovinco.

With the score at 4-2, Tosaint Ricketts scored the dagger goal, as he outleaped Henry to get his head to a Michael Bradley free kick.

The Whitecaps have a sad history of losing close, bizarre games to TFC in the Canadian Championship. They decided to change it up this time around — a blowout loss instead. And, while Whitecaps fans can look back to a history of Canadian Championship cursed luck, this time, they can point their fingers at their front office and their players. While Toronto FC’s Cup win is the beginning of the salvaging of their season, the Whitecaps need to find an identity, and they need to find players who can fit in that mould. For too long, the Whitecaps, well, we don’t know who they are, outside of that phenom teen who shows up in the highlight reels. We can’t really say what the Whitecaps style of play is.

But, by losing this Cup final the way that they have, the Whitecaps have used the last bits of fan goodwill and patience that are left (if there really was that much left to begin with). It’s time for Robinson and his Whitecaps charges to answer the most basic of footballing questions: Who are you?