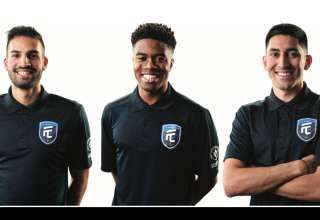 Alberta is having a tough time getting oil to the world via any sorts of new pipelines. But the University of Alberta’s soccer talent pipeline is going strong.

Sarkaria was taken in the Canadian Premier League draft by FCE, who holds the rights to two other Golden Bear alumni; goalkeeper Connor James and defender Noah Cunningham.

“I think it says a lot that four of the 21 players drafted in the Canadian Premier League come from the U of A,” said Sarkaria. “I know the program has underperformed in the last couple of years, but the number of players selected speaks to the quality of the program.”

Sarkaria is Canada West’s all-time leading scorer. He also teamed with Zebie on the Foothills FC team that won the 2018 PDL title.

“I want to come into camp and earn a spot,” said Sarkaria. “I want to prove Jeff right. I want to play a big role for this team and become a big goalscorer.”

Funny thing is, in the years leading up to the Canada West scoring record, Sarkaria didn’t see himself as a goal-scorer. It was Paulus who told him to be, well, a little more greedy on the pitch.

“I went to the academy under Jeff and developed under Jeff,” said Sarkaria. “I became more of a goal scorer at the U of A, and a lot of that has to do with Jeff telling me to shoot more. I was an unselfish player — I liked to get assists more than I wanted to score goals. But Jeff told me I wasn’t shooting enough.”

For Zebie, who appeared in one NASL match for FCE, he’s thrilled to rejoin his brother Allan, an NASL veteran, on the Eddies’ squad.

“My brother and I are very close,” said Bruno. “I wanted what was best of him. And when he signed, it motivated me. I wanted the chance to play with my brother.”

Bruno knew for the last month that he’d be returning to FCE. But, he had to keep it quiet. Now that the news is out there, he has to hurry up and wait for training camp to arrive — and the first-ever Canadian Premier League season to launch.

“This league means a lot,” he said. “For players, it’s a chance to show what we’ve got in front of our family and friends. This is our platform to show what we can do.”

Khabra was the Golden Bears’ MVP, and in 2018 received the President’s Trophy for excellence in athletics and academics. He was also an Academic All-Canadian.  And his relationships with Sarkaria and Zebie goes back to youth soccer, at Edmonton Juventus and through the FCE Academy.

“I think it will make the transition to becoming a professional player easier for me, because I know Jeff, I know the players and I know the kind of system he plays.”

And, for the Green and Gold, he has nothing but raves.

“I think this shows how good the program is. We all wanted to get an education and continue with soccer. The university developed us as players and as individuals .”