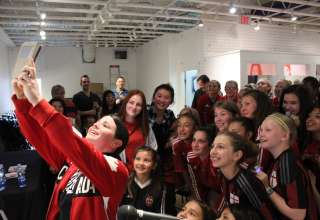 Diana Matheson takes a selfie with many Edmonton players.

Diana Matheson feels like Canada is getting closer and closer to getting a NWSL franchise. And, like many of her fellow national teamers, she’s waiting on pins and needles for it to happen.

“I think it is reasonable that NWSL gets to Canada, though,” Matheson said Friday night before she spoke to a select group of Edmonton soccer players, coaches and parents at FC Edmonton’s fan shop, as part of the team’s Pro Connect series. “I think it’s been on the radar for a while. I know Vancouver’s been very interested, there’s always rumours. Hopefully, that happens sooner rather than later. And, then, once with one team in, I think it’s totally possible for there to be another, whether it’s Edmonton, Ottawa, Montreal, or Toronto. I hope we can be similar to MLS, and just keep building and adding Canadian teams, adding academies to those and suddenly we’ve got a great feeder system for the national team.”

The 33-year-old national-team veteran and two-time Olympic bronze medalist, now property of the Seattle Reign, spent the weekend in the Alberta capital to be part of FC Edmonton’s celebration of girls in soccer. She is out for the NWSL season after she injured the same knee that forced her to miss a number of Women’s World Cup matches in 2015.

Matheson said that she believes NWSL coming to Canada is a more reasonable choice for developing the women’s domestic game. Earlier this week, Canada Soccer Hall of Famer Amy Walsh suggested that Canada needed a national women’s league in the same vein as in the work-in-progress Canadian Premier League.

And, she said that a Canadian team would be a massive draw for Canada’s players, currently allocated throughout the league. Of course, being under contract to the Reign, she couldn’t say too much about her interest in playing for a Canadian team that’s still a hypothetical at the moment.

“The draw of playing in and around your home town will be huge for players. I’m not personally from Vancouver, but Vancouver also has the benefit of being a beautiful city that a lot of the players, whether Canadians or not, would love to play in. I just got to Seattle, and I know I’m not playing this season, so I want to stick around in Seattle another season or two. But if it is Vancouver (for NWSL), I know players would love to go there.”