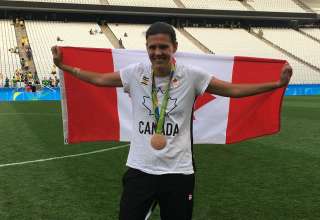 Sinclair, to no one’s surprise, was announced as Canada’s top player on Thursday. And she accepted the award with the grace of the average Canadian, by wanting to talk about her team more than she wanted to talk about herself.

“It’s something that never gets old and I think this year, more than ever, our national team reached new heights, new levels, being ranked now in the top four in the world, back-to-back podiums,” said Sinclair. “This would not have been possible without my teammates and the entire national-team staff and, this year more than ever, my family. I just look forward to continuing on and reaching the number-one position (world ranking) in the next couple of years.”

Sinclair said that, with an infusion of young talent that helped Canada to the bronze medal in Rio, she saw 2016 “as a launching pad for our team.” And then made it abundantly clear that she would rather talk about Canada’s up-and-coming players than about herself.

“There’s no turning back from this moment on. We are only going to get better. You see the likes of a Jessie Fleming, a Deanne Rose, Janine Beckie, Ashley Lawrence. The future is so bright for this team, I just see 2016 as the year we put the Canadian soccer team on the map in terms of the world stage.

“I’ve waited my whole career for this, to have a team from player one to 23 that are just world class, that you can put anyone on the field and they’re going to perform.”

Sinclair now sits at 165 international goals, 19 behind American Abby Wambach. But, she said that passing Hamm for second will always mean more to her, even if she does get 19 more tallies.

“A huge moment for me was actually passing Mia Hamm. As a kid growing up, she was the face of women’s soccer. I had her jersey growing up and I remember thinking after my first year or two on the national team, ‘oh my god, she has so many goals, how is anyone ever going to reach that level?’”

And then, later, asked about targeting Wambach’s record, she said

“It was a bigger deal to pass Mia because of what she meant to me as a youngster growing up.”

With no major international tourneys in 2017, Sinclair said she is looking forward to playing a full NWSL season in Portland — and gunning for a title. In just 12 NWSL matches last season, she scored seven times.