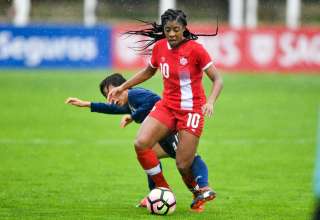 The Canadian women’s national team finished their run at the Algarve Cup Wednesday with a 2-0 win over Japan — winners of the 2011 World Cup, finalists in 2015, but now on a downward trend.

Canada finished the tournament with its third straight win after losing the opener to Sweden by  a 3-1 count.

Both of Canada’s goals were absolute beauties.

Janine Beckie opened the scoring; coming in from the left side of the penalty area, the ball came back to her after her initial shot was blocked. If at first you don’t succeed, try and try again; that’s what they say, right? Well, Beckie put her foot through the ball, and her second effort screamed into the top corner.

Not to be outdone in the “one for the highlight reel” department, Ashley Lawrence made it 2-0 after she dashed in from the right wing to take a pass from Christine Sinclair, squeezed past one Japanese defender, then poked the ball to the middle of the area, then dashed and dove to beat another Japanese defender to the ball and, in the process, poked the ball across the goal line. I know that was a run-on sentence, but, dammit, Lawrence’s effort deserves a run-on sentence.

“We achieved one of the key goals we set out prior to this tournament: bring this team back together after a long break, build on the team’s foundation with some different tactics, and give more players high-level tournament experience,” said coach Kenneth Heiner-Moller in a release issued by Canada Soccer.  “We played all 23 players throughout the group stage, which shows the depths of this squad and we played a variety of styles during the tournament.”