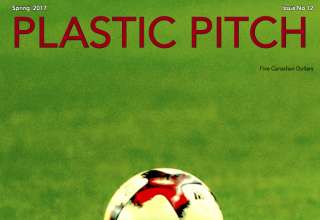 The spring issue of Plastic Pitch is now live in the app and can also be found at our Shopify store!

Why is this issue worth  five dollars of your hard-earned money?

From the Canadian Premier League to Toronto FC, there’s lots to read:

• Matthew Gourlie looks at how Canadian soccer supporters are embracing the Canadian Premier League, even though the circuit itself has yet to be formally announced;

• We look at Maxim Tissot‘s long courtship with D.C. United, and how it finally paid off;

• We ponder why, in the wake of the Women’s World Cup, that female registration numbers in Canada are dropping off;

• A look back at the remarkable career of Melissa Tancredi;

• A look at the people behind the new indoor soccer franchise in Toronto, and their hopes to bring an indoor soccer World Cup to Canada in 2020;

Whew! Look for the Plastic Pitch app via iTunes or Google Play, or use the Shopify store to get a digital copy e-mailed to you!