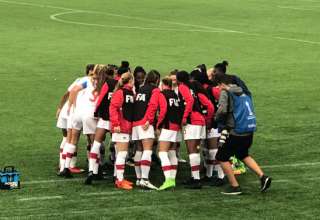 In its U-17 Women’s World Cup quarter-final win, the Canadians didn’t allow the German to get a single shot on goal.

In Wednesday’s semifinal, it was Canada’s turn to go shot-less. Yes, Canada had attempts at goal, but none on goal in a 1-0 loss to Mexico. The Mexicans will face Spain in the final.

The Mexicans beat Canada at the CONCACAF Championship, too.

The only time that Canada got a shot towards the target, it went in. But the goal was correctly ruled out for a foul in the lead-up to Jordyn Huitema’s shot. So the goal — and the shot on goal — were erased.

Halfway through the first half, things went sour for Canada. Alison Gonzalez made a run into the box, with Canadian defender Maya Antoine in hot pursuit. But Antoine made the ill-timed decision to stick out a leg, and Gonzalez went down — making for an easy penalty-kick decision.

Mexican captain Nicole Perez’s effort from the spot went in, with keeper Anna Karpenko rooted to the spot.

The Canadians thought they had tied the game with their first shot on goal just minutes before the half ended. After a Mexican giveaway, Teni Akindoju and Huitema came up the field on a two-v-one rush. Huitema put the ball in the net, but not until after Akindoju, ahem, cleared the way by flattening the lone Mexican defender, Tanna Sanchez. Really, it was a perfectly executed pick and roll. Except, well, a pick and roll is a basketball thing, not a soccer thing. So, the goal was called off and, frankly, Canada didn’t get close to troubling the Mexicans after that. Crosses were cleared. Runs up the wings were stopped. Maybe, as much as Canada wants not to play direct, the best choice would have been to hoof hit-and-hope ball after hit-and-hope ball up to Huitema, who offered a towering presence up top.

Ten minutes into the second half, Silvana Flores was inches from putting the Mexicans up by two, but her curling effort from just outside the penalty area struck the post.