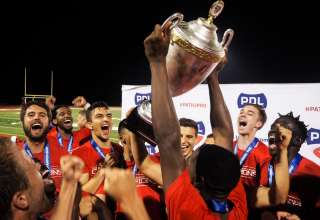 With just a couple of minutes left in the second half of extra time and the score tied at 2-2, Nico Pasquotti scored for 10-man Foothills against a Reading United FC side that was down to nine players. Ali Musse finished off a brace with an insurance marker right before the final whistle, and Foothills took the game, 4-2.

Pasquotti cut in from the right side and delivered a brilliant left-footed strike that nestled inside of the far post.

It is amazing how the game of football giveth and taketh away. Two years ago, Foothills traveled to Michigan to take on the Bucks in the PDL final. That game, like this one, was tied 2-2 late. But, Michigan was awarded a controversial late penalty for the deciding goal.

This time, it was Calgary who got the break with the score tied 2-2. Reading, playing at home, had burned all of its subs. Then, in the second half of extra time, Pierre Reedy, who had come on as a sub, went down injured. He couldn’t continue.

So, Reading, who, like Calgary, were playing with 10 men — well, the 10 went down to nine. And Foothills found a new gear knowing that they would finish the extra time with the man advantage. And Foothills got the breakthrough, and the insurance marker.

The game started off quickly, and Musse gave Foothills the lead just 12 minutes in, with a rocket of a left-footed free-kick. The pitch in Reading, Penn. has football lines on it, so we knew that Musse’s bullet traveled exactly 32 yards from his left foot to the top corner of the goal.

Aaron Molloy equalized for the home side with a stunning free kick effort of his own just before halftime. This one came from just outside the penalty are.

Now, in the 79th minute, things got very interesting (remember what I just wrote about the game of soccer giving and taking). Sub Kieran Roberts had an open header in the box to give Reading a 2-1 lead. But, on the ensuing kickoff, Foothills played the ball down the right side, the ball bounced high on the artificial turf, and Reading centre back Kamal Miller made a sloppy attempt to get it with a high boot. He got his second yellow of the game. So, just seconds after taking the lead, Reading went down to 10 men.

In the 85th, Reading paid for Miller’s folly. Foothills players poured into the box, as Reading tried to hold on. But defender Dominick Zator’s deft volley floated over Reading keeper Bennet Strutz and into the goal.

Calgary’s Dean Northover then saw yellow for blindsiding Reading’s Zach Zandi, and might consider him lucky to stay on the pitch. And you have to wonder if the match official was still thinking about the Northover challenge when he decided to give Chris Serban a straight red for a late sliding challenge just before the end of the second half.

But it was Calgary who would get the breaks and dominate proceedings — and, get some redemption after getting to the final and losing in such heartbreaking fashion two years ago.

But, boy, the two Alberta teams are already sending warning shots to the rest of the leagu…