May 28, 2022
9 New Articles
Home Global Game CONCACAF Oh Canada! U-23 side is stellar in win over the United States 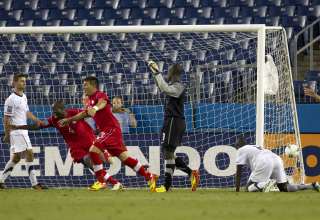 The Canadian under-23 soccer team pulled off the shock of the 2012 CONCACAF Olympic qualifying tournament with a 2-0 over the heavily favoured United States deep in the heart of American territory at LP Field in Nashville, Tenn.

While it was an absolutely famous win for Canada, the joy was tempered by Randy Edwini-Bonsu’s straight red card in the final minutes for reasons unknown.

“I didn’t know as well so I only saw the fourth official calling the referee and giving him instructions to give the red card to (Edwini-Bonsu),” said coach Tony Fonseca in his post-game press conference. “But I didn’t see anything, I didn’t hear anything. Honestly I don’t know what happened.”

Toronto FC’s Doneil Henry scored the first goal in the second half on a Phillipe Davies corner kick, and Davies crossed to Lucas Cavallini for the second. The Canadian team now finds itself in the driver’s seat in Group A.

“(Henry) was a big talker and he told me to give it to him on his head and I finally found him,” said Davies of setting up the first goal. “I tried the two previous (corners) and the third one was the good one.”

It shares the lead with El Salvador on four points with the Central American side holding the advantage on goal difference. El Salvador, however, still has to play the Americans in its final game while Canada will take on Cuba, who has conceded 10 goals in two games.

Canada was under early pressure in the early part of the first half as the Americans held the ball for long stretches of time but failed to carve out many chances as Canada’s back line looked sharp and composed.

As the half wore on, Canada found their feet and it was Edwini-Bonsu usually at the centre of it. Edwini-Bonsu had a few chances in the final 10 minutes, as did Evan James, who had come on for an injured Babayele Sodade.

The fact that Canada was tied at the half was one thing, but it was also creating some chances of its own and many players were playing impressive games.

“Everyone’s just happy. That’s the most important thing. But the coaches told us we can’t get overconfident,” said captain Nana Attakora. “We still have a game on Monday and if we lose that game, this game is meaningless.”

The Americans had the ball in the back of the net just two and a half minutes into the second half. Freddy Adu launched an inch-perfect free kick that found the head of Ike Opara who jumped high above everyone else and his header found the corner but the flag was rightly up for offside.

Canada responded quickly and Edwini-Bonsu had a left footed shot deflected out for a corner.

Canada silenced the 10,578 in attendance in the 58th minute. The Canadians capitalized when American goalkeeper Bill Hamid rather unwisely came off his line to try to claim a Davies corner kick, but Henry beat him to it to head home.

“It was great. There’s no better feeling than that,” said Davies of getting the chance to silence the home crowd not once, but twice. Though there was only a small Canadian media contingent covering the tournament, Davies still found himself in a swarm of media, mostly American journalists likely as stunned with the result as the Canadians.

“We’re playing in America and we beat them 2-0—great.”

Michal Misiewicz was Canada’s hero in the first game and preserved the lead in the 65th minute. Jorge Villafana found Freddy Adu but Misiewicz dove smartly to his right to deny the American captain.

Canada closed out in improbably result in the 83rd minute when Davies received a short corner on the right-hand side before putting in a low cross that an unmarked Cavallini dropped down to head home from close range.

Just as Canada was getting ready to celebrate and Edwini-Bonsu was substituted, the fourth official called to the referee, Jafeth Parea of Panama, and the red card was shown.

The diminutive forward needed to be restrained before being escorted off the field.

But this didn’t stop the celebrations and even Edwini-Bonsu was smiling as he made his way to the team bus afterwards.

This was not a fluke 2-0 result. This was a thoroughly deserved win as Canada was the better team.