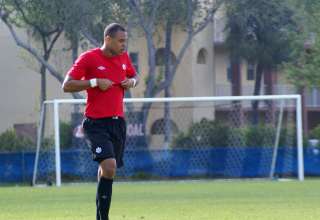 Less than a week after being one of the four cuts from the Canadian U-23 team, FC Edmonton Kyle Porter got back down to work.

Porter scored three first-half goals as FC Edmonton routed WSA Winnipeg of the PDL 7-0 Saturday in the Manitoba capital. And, Chilean teammate Yashir Pinto scored twice in the preseason friendly. Pinto, who can’t play in the United States until his immigration paperwork is completed, is on loan from Chilean powerhouse Colo-Colo.

And even though Porter doesn’t speak Spanish and Pinto’s English is weak, the two found a way to click on the field throughout the match, combining to create chances and goals. Porter said the two are developing an almost psychic connection on the field.

“I love playing with Pinto. He understands the way I play, I understand the way he plays. We just work really well together. Football is our language.”

“It was an important game for use, so we can continue to progress,” said Porter. “It was great that we got a lot of goals today, as it helps us get ready for the season

Porter made sure to pass on his congratulations to the Canadian U-23 team as it beat the United States 2-0 in the Olympic qualifying tournament at the same time as FCE was coming at WSA Winnipeg in waves.

Porter was hampered by an inflamed pubic bone through the Canadian camp, and is still working to get himself back to 100 per cent fitness.

“Definitely through camp, I progressed every day,” said Porter. “I am coming back to my old self. It’s getting there — it’s a process.”

WSA Winnipeg will get the chance to redeem itself against the NASL side on Sunday.

RICE WON’T BE AN EDDIE: American right back Barry Rice, who was enjoying a good camp, won’t be with FC Edmonton this season.

The Eddies confirmed on Saturday that Rice, a former University of Kentucky standout and, later, D.C. United player, has informed the club that he plans to take the 2012 season off. Rice, who had concussion issues in his time in MLS, cited personal reasons for making the decision to not join FCE.