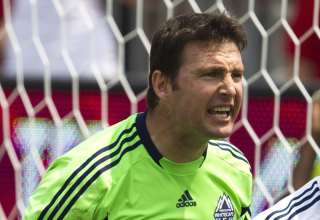 The Vancouver Whitecaps have yet to lose this MLS season.

But, over the last two matches, the Whitecaps have created just one goal — and one decent scoring chance. That came on the corner kick that allowed Jay DeMerit to head home to beat Chivas last week.

On Saturday night at B.C. Place, D.C. United keeper Joe Willis had his name called not for any spectacular save that needed to be made, but for his collision with Alain Rochat that forced the Whitecaps’ defender to leave the match, favouring his left leg.

In Saturday’s 0-0 draw with D.C United, the Whitecaps created nothing at all. Despite having Camilo and Davide Chiumiento on the wings, and the firepower of Sebastien Le Toux and Eric Hassli up top, the Whitecaps didn’t trouble Willis at all. This was an ugly tearjerker of a game, with the ball stuck in midfield, with both teams cancelling each other out. For the second week in a row, the Whitecaps, the team that has so much offensive talent, the team that has the second-highest payroll in MLS, played a game so dull that it would be a crime for anyone to bother trying to remember this one.

Against anyone that isn’t an expansion team, the Whitecaps have looked offensively inept — and created absolutely zero from open play.

Now, some perspective, here. The Whitecaps do have seven points from three matches. The Caps have a road win under their belts, which they didn’t achieve all of the 2011 season. And, maybe most important of all, the Whitecaps’ rebuilt defensive line has yet to yield a goal this season.

DCU got close to scoring on the Caps than anyone else has this season; in the second half, Designated Player Hamdi Salihi’s glancing header off a corner looked to be heading into the goal, but Whitecap keeper Joe Cannon dive to his right and was able to stretch and palm the ball away on the short hop. It should be a contender for Save of the Week.

But, in terms of goalmouth excitement, that was about it — for either team.

When the Whitecaps beat the Impact in the season opener, coach Martin Rennie said he wanted to ensure that the Whitecaps were a difficult team to play against. Check. Anyone who watched the Carolina RailHawks play in the NASL last season (that is, before the club’s late-season implosion and playoff exit) recognized that, despite the goal-scoring prowess, Carolina’s forte was how the club physically dominated its opponents in the midfield. Before they RailHawks beat you with goals, they beat you up in the midfield.

And, with Jun Marques Davidson and Matt Watson in the centre of the 4-4-2, it’s clear that Rennie wants the Whitecaps to learn how to win ugly before the club needs to worry about the star power in attack.

In a conference as tough as the West, where having seven points out of three matches just puts you in the pack, rather than ahead of it, dropping any points to lower Eastern teams (that is, anyone that is not Sporting Kansas City or Houston) can come back to haunt you in October.