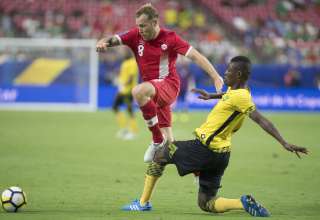 Canada goes out of the 2017 Gold Cup with a 2-1 quarter-final loss to Jamaica and while there are reasons for optimism, the big question now must be asked.

Where does it go from here?

There’s one game scheduled in September in Jamaica and with no World Cup qualifiers or Gold Cup games of any sort for years, the program will have to try and continue developing on friendlies.

So now Canada enters the phase where it has to make the most of its friendlies to try and inch up the ranks to get a good draw for the 2022 World Cup qualifying campaign.

“We’re going to try to play the best teams in the world that we can possibly play,” said coach Octavio Zambrano.

Against Jamaica, a team in a similar position to Canada already out of qualifying for the 2018 World Cup, Canada was on the back foot almost right away.

Having created a few half chances in the opening minutes, Shaun Francis volleyed Jamaica into the lead off a Darren Mattocks cross where the defenders left too much space for him to finish.

From there, Jamaica sat very deep but still troubled Canada with its pace on the counter.

Canada had plenty of the ball but couldn’t break down Jamaica’s low block. As fast as the Canadians are that quick counter that has proved useful in this tournament was nullified.

Romario Williams struck from distance early in the second half to double the lead.

“It was hard to break them down but once we did in the second half when Junior (Hoilett) gets his good goal and you think by then you’re going to get a second,” said Scott Arfield. “It’s a horrible way to go out and sometimes you just need to hold your hands up.”

There have been no shortage of games where Canada couldn’t put chances away and paid the price and while there are talents like Alphonso Davies who bring new talent to the picture, that can still be said to be a Canadian issue.

After Hoilett pulled Canada back, Jamaica showed little interest going forward and Canada had almost free right to get into Jamaica’s territory.

Teams that qualify for World Cups will find a way through and get all the points it deserves and Canada knows it’s not there just yet.

“I think we always had the run of play, to be honest,” said  Teibert. “I think we keep pushing, we keep trying to put the ball into the back of the net. We could quite easily be up instead of down two goals. I don’t know how many chances they did have but they capitalized on both of their chances that they did have.”

While there is optimism that a new generation could bring some success to the long suffering program and its loyal fans, that will have to be tempered by the notion that there’s little to play for in the coming few months.

The big games are years away and making the most of the coming months and years are vital for Canada to qualify for a World Cup without having the benefit of co-hosting the thing.

“Friendly games are good when you’re putting on the jersey but when it means something like this competition and tournament football, it means so much more than a friendly,” said Arfield. “I think it’s going to take ages for people to get over this, personally. It’s been a long campaign but we certainly thought we were good enough to go all the way. To dominate a game, dominate the ball the way we did and create so many chances—I think the Jamaicans were lucky and we were a better team overall.”