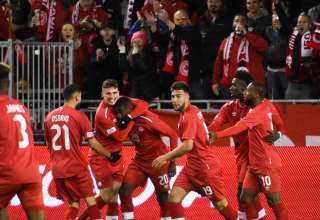 Canadian men’s national lteam coach John Herdman has made it something of a trademark to throw young players right into the mix. With six teenagers seeing the field in Canada’s 5-0 win over Dominica, it appears its steady on with that philosophy.

Jonathan David scored, Junior Hoilett added a second, a penalty from Lucas Cavallini and a marker from Cyle Larin — plus an own goal from Dominica — that was Canada’s tally on the night.

The announced attendance of a shade over 10,000 took in Canada’s next generation making relatively light work of their less-fancied opposition. That attendance figure felt a bit generous with no tickets being sold in the upper levels at BMO Field and plenty of red seats down below.

That being said, Canada’s newest talents now know what it’s like to start a cycle with fans staying away — saving their interest for bigger matches to come.

On the eve of a new NBA season and the Leafs making early waves in the NHL, a Canadian national soccer game on a chilly fall evening along Lake Ontario was always a longshot to move the needle in the Toronto sporting landscape.

Canada Soccer had scattered posters around buses and around downtown billing the Nations League as the start of the road to 2022. The real road doesn’t really get underway for about a year. This is really the road to the CONCACAF Gold Cup and given how poorly the Gold Cup was attended when Toronto hosted a game in 2015, that likely wouldn’t resonate much.

Canada hasn’t had to qualify for a Gold Cup they did it for the 2000 edition of the tournament and we all know what happened then.

It wasn’t the finished product with Canada missing plenty of chances to pad their own statistics, but with players who can boast their training at the likes of Liverpool, Barcelona, Juventus and coming soon, Bayern Munich. But the average fan won’t really care about that until they actually see those players suited up for those massive clubs on Tuesday and Wednesday nights and won’t be drawn to the argument that they’re in the academy or close to the first team.

Those fans who would come out regardless of opposition got a taste at what is possible given some time.

“Not only is there talent there, I think there’s real depth. There are players that could have been on the field that weren’t,” said Herdman. “For the fans coming out to see Ballou Tabla’s first touch that had something like 20 step-overs, it’s a different breed of player. It’s a different type of player. The type that finds one seam and has the support of the quality like Atiba (Hutchinson) that can find them.”

Herdman is truly very fortunate to come into the program when he has. He’s shown he can work with young talent on the women’s side and is blessed with some of the most impressive young attacking talent the program has seen in years.

It says something that the likes of Larin can start the game on the bench. A lack of attacking depth has ultimately been a sword that’s impaled many a Canadian coach in the past.

“I think you could see they hit the ground running,” said an impressed Hutchinson who certainly won’t have to carry as much of a load as in the past as he plays his final games for Canada.

Hutchinson played in a more withdrawn role oftentimes sitting with the defenders. But he showed that trademark touch that’s gone unappreciated in this country for so long.

His long diagonal balls were perfectly weighted. It was a quietly profound effort from the veteran.

“They just wanted the ball and to express themselves. They’re young players. They’ve got a lot of talent and confidence playing with their clubs. There’s a chance here to come and play for Canada and put on a show for fans here.”

Next year is shaping up to be a big one for the program with the Gold Cup and more Nations League action starting with French Guiana in March. And of course, the real road to 2022 is just around the corner.

With so few options for places to play in Canada (don’t bet on Vancouver having a shot) in March, odds are good they’ll be right back here for that game.

The opposition won’t sell too many tickets. If they event want that aspirational 10,000 goal, expect Canad a Soccer to push those young talents to the front of its marketing efforts.

The team didn’t do much local media in the run-up to the game. Herdman made appearances at TSN and CBC News Network but those are aimed at the national audience and it’s always going to be tough to spin these games into relevance for the World Cup this far away from 2022.

The fans will come given the continued results but, as is usually the case in these sorts of things, they’ll likely only really show up when the opposition has a bit more of a bite to them.

The diehards will certainly be excited about the potential but to really get hearts racing in Canada, there have to be results first.