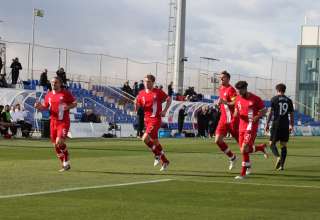 Thanks to a Tosaint Ricketts goal that capitalized on a New Zealand defensive miscue, Canada is off to the races in the John Herdman era with a 1-0 victory is San Pedro Del Pinatar, Spain.

It was route one soccer to its finest that got Canada the lead, although it was probably not meant that way as Dejan Jakovic knocked forward a long ball that got twisted around in the heavy winds. The New Zealand back line didn’t know how to manage that ball and it then sat up for Ricketts who was all by himself to score goal No. 16 in his international career.

“It’s big. It was my first game of 2018,” said Ricketts, who’s dealt with a thyroid issue in the early MLS season. “I had a rough start with health problems earlier this year. So it’s a big step forward in the year and I’m happy to get the minutes. I’m happy to play for my country and I’m happy to show that I can provide.”

DeRo is highly recognizable in the North American game thanks to his long career played in MLS, while Ricketts, from Edmonton, has toiled abroad and away from the public eye before finally coming back to Toronto where he’s been in two MLS Cups with TFC.

“It’s a big accomplishment to even be listed in the same conversation as DeRo,” said Ricketts. “He did so much in Canada. He’s done so much for MLS. I’m just grateful to help out the country in any way possible.”

It wasn’t all sunshine in Herdman’s first game in charge since making the switch from the women’s program to the men’s.

Based on the first 10 minutes or so, odds would have been favourable for the Kiwis to take the early lead and they had two very close chances to do so early.

But Michael McGlinchey will live to rue to missed chances that went off the post just seconds apart.

The All Whites also had the ball past Milan Borjan, who mishandled a cross but it was called back for offside when former TFC player Jeremy Brockie, who didn’t make contact with the ball, certainly was involved in the play as he provided a screen on Borjan.

Canada saw through those shaky moments and did string together some dangerous moments in attack.

“We knew the wind was going to be a bit of a factor,” said Herdman. “We were preparing for whatever New Zealand were going to turn up and throw at us. We didn’t really have any intel on them so the first 15 minutes I think we were caught on the back foot a bit and just not really getting to grips with what New Zealand were offering.”

The player perhaps most responsible for Canada getting into the game was Liam Millar, the 18-year-old Liverpool prospect was not at all out of his depth and was a handful racing down the left side of Canada’s attack.

Time and again he would cut around defenders and launched a few tantalizing crosses. He very nearly got himself a goal in the second half as well in what was about as close to a dream debut as possible.

“I thought I played quite well, to be fair,” Millar said. “I was confident. I wasn’t afraid. I think I did quite well. The only thing I missed was a goal.”

Herdman’s never had a problem with throwing young players into the fire and seeing how they fare. He did it with Jessie Fleming and Kadeisha Buchanan with the women and he’s done it with Millar on Saturday.

Millar proved that he can swim and Herdman’s indicated that he may be tough to dislodge as the CONCACAF Nations League gets rolling.

“He’s good enough,” said Herdman. “He’s light the camp up this week. The senior players have got behind him from the first session. He was fearless. He’s got that x factor. He doesn’t know any other way than to try and terrorize fullbacks. It’s exciting.”