September 27, 2022
9 New Articles
Home CONCACAF On a big night for soccer, we should celebrate Sadiki’s goal more vociferously than Porter’s 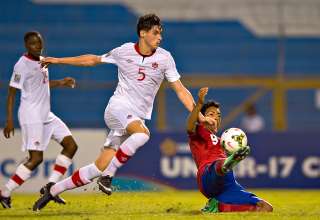 So, on a Tuesday night packed with action for the Canadian soccer supporter — what was the most important moment?

Was it a last-gasp goal from Cameron Porter, or a second-half marker from Kosovar Sadiki?

Porter’s injury time equalizer was what the Montreal Impact needed to advance in the CONCACAF Champions League at the expense of Mexican side, Pachuca. When it looked like the Impact would once again be foiled by a Mexican side at the quarter-final stage, the rookie-turned-super-sub notched the marker that turned the Big O into a big party.

Meanwhile, in front of about 37,995 fewer spectators in the stands in Honduras, Sadiki scored the goal to give his Canadian U-17 side a precious 3-2 win over Costa Rica. The win moved Canada to two wins in two matches at the CONCACAF U-17 Championships; to have any shot at the qualifying for the U-17 World Cup, the Canadians have to finish in the top three in their group. And that means the Canadians will need to finish ahead of either Mexico, Panama or Costa Rica. If the Canadians finish atop their group, then they get a direct route to the World Cup, with no worry of a crossover playoff.

Let’s face it; after the U-20 team flamed out at their age group’s CONCACAF playdowns — and with the overall malaise that has gripped Canadian men’s soccer for, well, at least five World Cup qualifying cycles, we’ve grown accustomed to not expecting much from our national teams. Sadiki’s goal might end up being fool’s gold; but, for one hopeful night, it’s a light at the end of dark, dreary tunnel.

Now, let’s get back to Porter’s goal. A wonderful moment in Montreal sports, but definitely not a milestone in Canadian sports. In 2009, when more than 55,000 jammed into the Big O to watch the then-second-division Impact play Santos Laguna in the CCL quarterfinals, there was a lot to admire about that group. On that day, four Canadians started. Sure, there were Americans and other foreigners on the team, but with John Limniatis coaching, and local players on the pitch, there was no shaking the Canadian — no, the Quebecois — heart of this team. You might have loved that team, you might have hated that team, but with the passion of Canadian players like Sandro Grande and Nevio Pizzolitto, you had to admit that the team had a soul.

Fast forward six years, and this Impact team is about as Canadian as Kentucky Fried Chicken. The fleur-de-lis on the team’s crest only calls attention to the fact that no Quebecers (or Canadians raised outside of Quebec) played in either the first leg at Pachuca or the second leg at Olympic Stadium. Sure, the Impact is now an MLS side, but it’s no longer an us-against-the-world outfit with a uniquely Quebec heart; it’s a bunch of Americans and Europeans who wear a fleur-de-lis that has become about as meaningful as a New Orleans Saints helmet.

Sure, this Impact team of 2015 could have a couple of more shocks in it; but when it comes to likeability, when it comes to soul, it has barely a fraction of what the 2009 team had. Sure, 38,000-plus came out to watch Porter score against Pachuca; but more than 55,000 came out to watch the Impact win that first leg against Santos Laguna in 2009, before the famed late-second-half collapse in the second leg in Mexico.

Porter’s goal could mean something for MLS, but it means zero for the fabric of Canadian soccer. This Impact team has success in CCL — even though it could be dashed if the MLS Players Union makes the call to strike and a semifinal is decided by forfeit. But, in exchange for that success, is this a team without a soul?